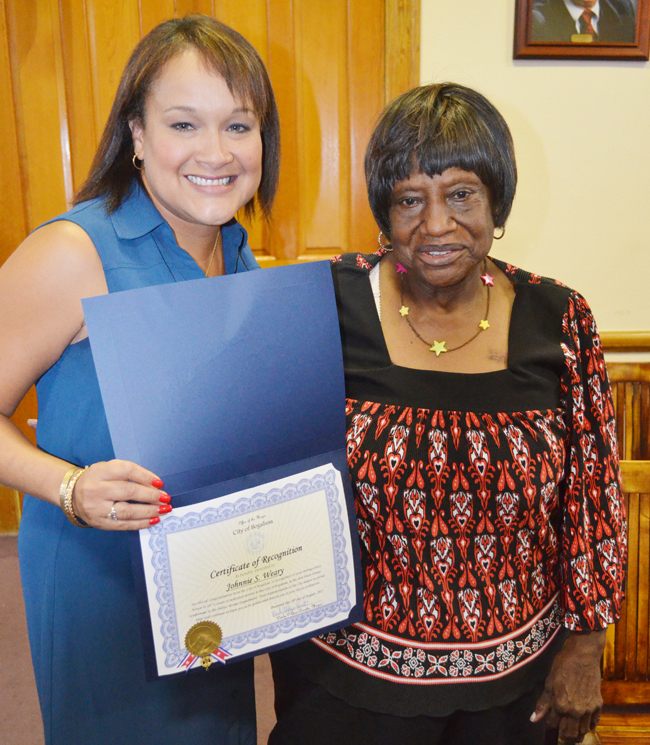 Ferrell regularly challenges the council with his in-your-face style. He does not  apologize for bringing attention to what he perceives as the city’s ills and the council’s inability and lack of desire to address those problems.

Council members received a double dose of the Ferrell fury when his wife, Rebecca Ferrell, addressed the council Tuesday night. She was upset by what she felt was the council’s lack of desire to clean up blighted property, remove abandoned cars and cut grass around the city.

“Doug Ritchie and Brian McCree have not tried to help Fate get abandoned cars removed or get grass cut,” Rebecca Ferrell said. “Ms. Kates tries to help everybody. Ms. Smith, the graveyard is in your district. It is really terrible. I care about the city, but I don’t believe you do.”

After those comments, Council President Teddy Drummond ordered her to stop making accusations and the bailiff approached and asked her to tone it down.

During Fate Ferrell’s remarks, a member of the audience disputed his claims about it being the worst city council he had ever seen. Ferrell turned toward her and told her to “shut up.”

Public Works Director James Hall said the gripes should be directed toward him.

“You all are complaining to the wrong people,” Hall said. “All the city council can do is give me a work order. It is a legal process we go through. I work when I can with the people I have. By law, when you buy a plot, you’re supposed to maintain it. We cut the rights-of-way.”

“Government is a slow process,” she said. “None of them make enough money to sit up here and listen to people belittle them.”

Ferrell did offer a constructive suggestion to help move the city forward during the public participation segment.  He was a former resident of Milwaukee, before he moved to Bogalusa. His suggestion was one that Drummond supported.

”We need to come together and have a town hall meeting so we all can solve our problems,” Fate Ferrell said. “We’re not getting them solved here. Milwaukee is a clean city. Any city you go to, they have rules that have to be enforced. We need to get off our rumps and make Bogalusa the Magic City. We all need to do it.  One person can’t do it alone.”

An ordinance to dedicate and change the name of the Davis Street Baseball Field to the Coach Mike (Michael) Harrington Baseball Field was unanimously approved.

“He gave so much to the youth in the Bogalusa community,” Kates said, as she held up petitions in support of the name change. “I’m appreciative.”

Andre Johnson agreed. He is a member of the Washington Parish Council.

“He had spent many a man-hour out there teaching our children character,” Johnson said. “I had a son who played for him. I think it’s a fitting tribute.”

“I support this ordinance,” he said. “I watched this man for many years. A lot of those kids he worked with grew up to be successful.”

“I’ve seen the effect this man put forward,” Joel Miller said. “Many times when they traveled, the money for hotel rooms came from his own pocket.”

In other business, the council:

• Approved an ordinance authorizing Perrette to contract with Vantiv for credit card processing. By changing processing companies, the city will save a 28-cent processing fee.

• Approved an ordinance authorizing Perrette to contract with proposer Dempsey Parden to fill the city’s need for Information Technology expertise. He lives in the Rio Community and owns Parden LLC.

• Approved Perrette’s appointment of Virginia Dunn to the Planning and Zoning Commission. She replaces Ellis Sampson.

• During public comment, Gwendolyn Francis implored McCree not to resign as he suggested he would in January at the last meeting. McCree smiled and said he intended to stay on.

Three ordinances were introduced. They will have public comment before they are voted on at the Sept. 1 meeting.

• An ordinance authorizing Perrette to acquire — by purchase of expropriation — ownership of parcels of property needed for construction and maintenance of the south runway overrun at the George Carr Airport.

Property owner William Leonard, of Ponchatoula, addressed the council and requested “just compensation” for the property at 1515 Van Buren St. Leonard said the city has offered declining offers for the property. He said offers ranged from $9,000 to $21,000. The property was appraised for $21,000.

• An ordinance authorizing Perrette to enter into a lease agreement with The Salvage Store concerning 215 Industrial Parkway. The lease will include provisions to expand the current location and installation of a cooler/freezer facility at the new premises.

• An ordinance authorizing Perrette to contract for professional services for the planning of a cold storage at The Salvage Store in the Industrial Park with RCL Architecture.