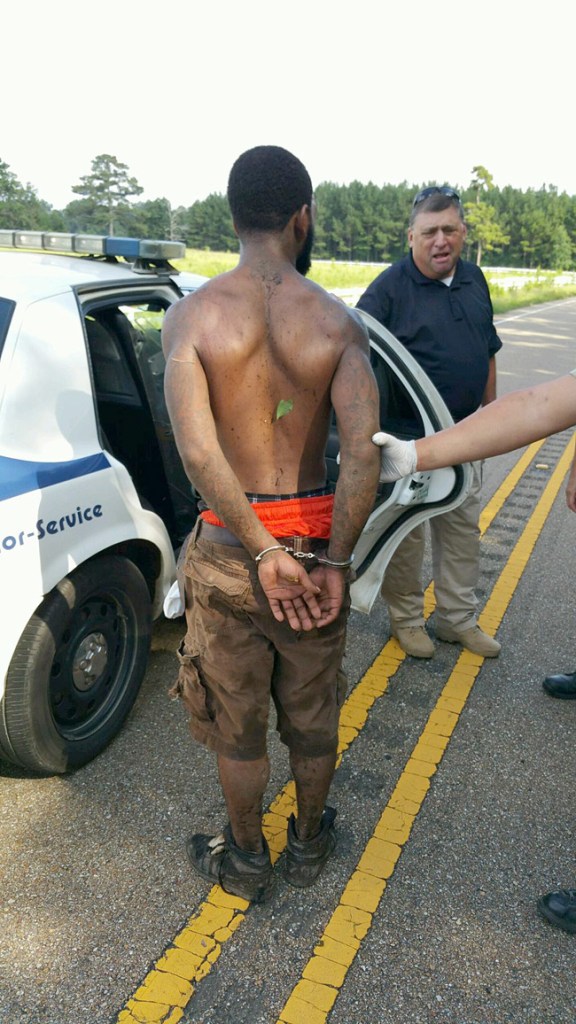 COURTESY PHOTO John Lamar Robinson is arrested after being tracked down with the assistance of canine teams from Rayburn Correctional Center.

On the morning of July 6, the Washington Parish Sheriff’s Office responded to a report of a burglary in progress at a residence on Highway 38. The homeowner returned home and surprised two males, one of whom fled in a vehicle and the other who fled on foot. Deputies requested the assistance of the canine team from Rayburn Correctional Center, which responded and tracked the man through the woods but were unable to locate him.

It was determined that several items, including a Glock semi-automatic pistol and a coin collection were stolen from the residence.

Mean-while, later the same day, Gemale Leeundra Weary, 28, a resident of Tylertown, Miss., sold a coin collection to a pawn shop in Tylertown. Video of the transaction indicated that the seller likely was the person who fled in the vehicle during the early morning burglary. The person was identified as Weary and was arrested and initially placed in the Walthall County Jail.  At the time of his arrest, he was in possession of the stolen pistol.

Washington Parish detectives continued to work on the case and were finally able to identify the person who fled on foot as John Lamar Robinson. On July 21, Robinson was located at his residence on Louisiana Highway 438 and fled on foot. Rayburn Correctional Center canine teams responded once more and tracked Robinson through the woods until they were able to locate and apprehend him. He was advised of his rights and transported to the Washington Parish Jail.

Both men are now in the Washington Parish Jail awaiting disposition of their cases. Robinson is charged with aggravated burglary and resisting an officer by flight. His bond was set at $25,000. He also has a probation hold, however, which carries no bond.

Weary is charged with aggravated burglary and failure to appear. His bond was set at $50,500. He faces additional charges in Walthall County.

Washington Parish Sheriff Randy Seal commented on the work of his officers.

“Our detectives stayed on this case like bloodhounds until they identified and arrested both thieves,” Seal said. “It seems there are always knuckleheads who are too lazy to work and who think they can make easy money by stealing from honest, hard-working taxpayers. That won’t work in Washington Parish as long as I am sheriff. Our officers will put in however many hours are necessary to identify and arrest criminals. I appreciate all they did and am grateful to Walthall County and Rayburn Correctional Center officers who assisted in this case. RCC Warden Sandy McCain and his staff are always willing to help and are a great asset to our parish.”