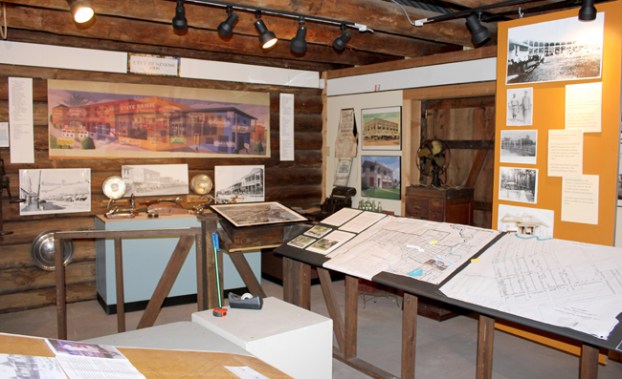 Officials with the Museums of Cassidy Park realize that any museum has to stay energetic and vital, so the museums regularly add or change exhibits.
Now, thanks to much hard work by Pioneer Museum Curator Millicent “Jimmie” Canter, with considerable assistance from Roosevelt Ludd, the museums have recently opened an exciting new exhibit that takes up about a quarter of the space in that museum. More importantly, the new exhibit, “Magic City Maps,” has a hands-on component for the public.
“We’ve put up copies of the earliest maps made when Bogalusa was being laid out and built. A number of really interesting pieces of memorabilia of the era, including automobile hood ornaments, are on display,” Hanemann said. “A lot of information about the beginnings of the city is posted, and we want the community to add to the history.”
Canter touched on the city’s earliest times.
“At the time, it was a city wholly owned by the corporation, the Great Southern Lumber Co.” Canter said. “There are maps of each of the four ‘quarters’ of the city as laid out by New York landscape architect Harvey Murdock. The exhibit includes famous photographs of the original civic and company buildings designed by Rathbone DeBuys of New Orleans, who designed many famous New Orleans buildings, including the main buildings of Loyola University. The location of each Bogalusa building is located on the maps.”
Separate maps of each quarter of Bogalusa have been enlarged to show every city block, and Canter and Ludd invite visitors to write their names on a flag pin and put it on the place where they grew up or where they currently live.
The city maps are complemented by Willie Lee Harry’s scale model display of the old Mill Quarters housing for “colored” employees of the Great Southern Lumber Co. and, later, Gaylord Corp., which the public is also encouraged to flag.
“All visitors are additionally invited to write a paragraph or two about their childhood neighborhood for an ‘I Remember When’ compilation. Some are already on display, and we’d love everybody to add the recollections for posterity,” Hanemann said.
“If you just want to speak into our little hand held recorder, that’s good, too,” Canter said. “We love to learn the stories any way we can. We’d like pictures that we can copy and return, too.”
Thanks to Main Street Grocery, the new exhibit also includes an approximately 8-foot-long copy of the store’s wall mural montage of Columbia Street that was painted by Bogalusa native Alvin Carter shortly before his death in 2009.
The mural component of the exhibit is fleshed out with photographs that show vintage automobiles and automobile businesses on Columbia Street through the years. And the photographs are accompanied by a vintage hood ornament collection, lent by Wayne Bourn, which reflects the artistic style and elegance of the old cars.
“The first Model T Ford cars coincided with the founding of Bogalusa, and many of them are seen in the old Columbia Street photos,” Canter said.
The Pioneer Museum is being transformed. It’s really cool and exciting. And we’re providing opportunities for people to add to the already available information to become a part of recorded history. I strongly encourage everybody to take advantage,” Hanemann said.
“I believe it’s a museum’s job to explore and nurture the connection to the past that makes us who we are now, to be the storyteller, the preserver, the educator,” Hanemann continued. “A lot of places don’t have anybody doing that, and much has been and continues to be lost. Bogalusa is very, very fortunate to have these museums.”
Hanemann said the public should be proud of the museum’s collection.
“I think anybody who hasn’t visited them would be stunned by their truly incredible collections that would be the envy of many bigger, maybe more culturally sophisticated, municipalities. And museum entry is free of charge. This community should be very proud.” Hanemann said.
Hanemann invited the public to check out the museum, share their own stories and become members.
Annual membership starts at $25 for an individual, $35 per family and $5 for a student. And members can take pottery, paper-making and other classes for free, except for small material fees.
To get a membership form, visit the museums from 1 to 4 p.m. Saturday or Sunday, or call Hanemann at 735-9188 or 750-6584 to arrange pickup.

Red Lane remembered as both friend and mentor