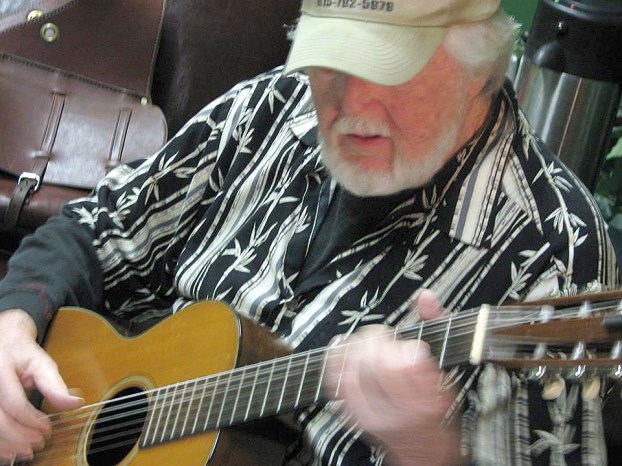 Red Lane remembered as both friend and mentor

Eli Seals remembers the good times with fellow musician Red Lane, the Washington Parish-born songwriter who passed away earlier this month.
Lane was born in 1939 as Hollis DeLaughter in Isabel near Bogalusa and ultimately adopted Red Lane as his professional name during a long and illustrious musical career. He was inducted into the Nashville Songwriters Hall of Fame in 1993.
Lane died July 1 from cancer in his hometown of Ashland City, Tenn., near Nashville. He was 76. Services and burial were July 9 in Franklinton.
In its first year, the Bogalusa Blues and Heritage Festival honored Lane as a Contributor to Cultural Arts in the way of writing. He was among the first 11 honorees on the Heritage Trail.
Seals, who has the Eli Seals Band, lived with Lane for less than a year in Ashland City for parts of 2009 and 2010. Lane lived in a converted DC-8 plane.
“Red was a giant of a man but was quite a soft-spoken man,” Seals said. “I talked with him a couple of weeks before he died, and he was still sharp as a tack. He never ran out of old stories to tell from the time he played lead guitar for Justin Tubb and Merle Haggard to other old memories.”
Lane worked with many of the industry’s greats.
Lane wrote classics such as John Conlee’s “Miss Emily’s Picture,” B.J. Thomas’ “New Looks from an Old Lover,” Tammy Wynette’s “‘Til I Get It Right” and The Carter Family’s “The World Needs a Melody,” with Johnny Cash.
Also, Lane collaborated with Dottie West on “Country Girl” and Merle Haggard on “My Own Kind of Hat.” More recent songs included collaboration with George Strait on “Tell Me Something Bad about Tulsa” and Lee Ann Womack on “He’ll Be Back.” Lane also co-wrote with Wayne Kemp on “Darlin’ You Know I Wouldn’t Lie,” a hit for Conway Twitty in 1969.
Seals said Lane had a large influence on his own musical career.
“The most important thing he taught me was to write songs that people needed to hear rather than what they wanted to hear,” Seals said. “He taught me how to dissect a song. He told me every syllable counts. He taught me to say what you need to say, and nothing more. It was the most educational part of my life when it came to songwriting.
Seals said Lane was a simple man who didn’t allow the limelight to affect him.
“He was everybody’s friend,” Seals said. “We hung out with superstars and the mechanic down the road. He was a great talent and songwriter, a musical genius and a friend to everybody who knew him. He meant a lot to me. He will be missed.”
Lane played guitar on two of Clarence “Gatemouth” Brown’s recordings at Studio in the Country near Bogalusa when Jim Bateman managed the studio in the early 1970s.
“Red co-wrote ‘Bogalusa Boogieman’ and ‘Monroe, Louisiana’ that Gatemouth recorded,” Bateman said. “Red was an excellent guitar player. He was extremely laid back and spoke through his music.”
Bateman said Lane showed him the ropes in Nashville when Bateman opened his production company, Real Records Inc., in 1976.
He was really helpful in showing me around Nashville when I was there,” Bateman said. “I hate to see him go. He will be missed.”

Staff reports A group of nine ladies held the winning ticket for the top prize of $5,000 for last week’s... read more