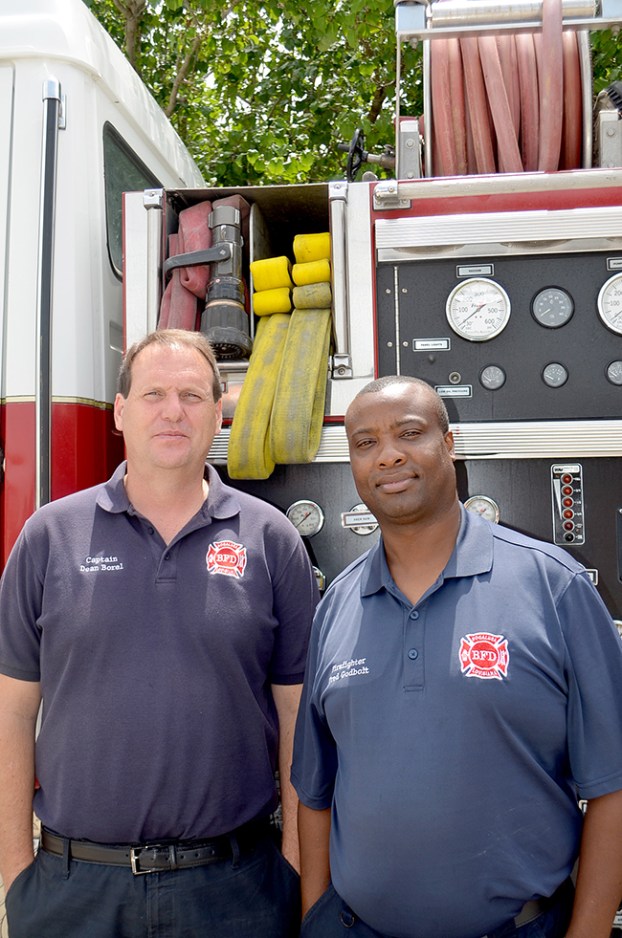 DAILY NEWS PHOTO/Randy Hammons Bogalusa Fire Department firefighters Dean Borel, left, and Fred Godbolt responded to a call on June 27 of a snake in the home of Janice Taylor near Bethlehem Baptist Church. They killed a cottonmouth with a pellet gun and then whacked it with an axe.

People are generally petrified whenever they come across snakes outside of a zoo exhibit.
The situation was no different for Bogalusa residents Janice Taylor and her daughter, Kiana, when they saw a large snake lurking in the utility room of their home near Bethlehem Baptist Church on Saturday, June 27. Not knowing if the reptile was poisonous, they called for assistance to get rid of the pest.
The snake, approximately four feet in length, was later identified as a venomous cottonmouth.
The family first caught a glimpse of the snake earlier in the afternoon in the rear of the house, but it slithered off and hid.
“My daughter said she saw a black and gold snake going into the utility room,” Taylor said. “Later that night, I saw something strange sitting behind the charcoal. I thought that this was too big for me to kill.”
Bogalusa Fire Department’s Dean Borel and Fred Godbolt responded and killed the snake with a shot from a pellet gun borrowed from a neighbor. They finished it off by hacking it with an axe.
The snake frightened Taylor so much that she mistakenly thought the snake had two heads. That was not so, according to Borel.
“One head of the snake was coming out the side,” Taylor said. Me, my daughter and mother were all afraid. If both heads would have bitten us, it would have been double the venom, and we wouldn’t be here to tell the story.”
Taylor said she saw a similar snake in an exhibit many years ago at the Franklinton Fair.
“Mr. Dean is my hero taking that snake out of here and saving us,” Taylor said. “We’re always going to the back of the house. If I had opened that back door I would have stepped on that snake.”
Taylor said the firemen are to be commended.
“I believe Mr. Dean and Mr. Godbolt should receive a Purple Heart because they did such a good job,” Taylor said. “I’ve never seen firefighters work as hard as they did that night.”
Borel recalled the incident.
“When we got there, the snake was under the hot water heater and had worked its way into the wall,” Borel said. “There was a small hole in the wall. Once we figured out it was in the wall, we cracked the panel so we could see it. It really had but one head.”
Borel said the department receives all kinds of calls.
“We get calls for snakes from time to time, but that was a first for me,” Borel said. “Usually snakes around here are chicken snakes or rat snakes.”
Borel has been a firefighter for 18 years’ and Godbolt for 20 years.
“I wasn’t really scared, but we don’t like to mess with snakes,” Godbolt said. “We were just trying to help out somebody in the community.”
Borel offered some tips on how to keep snakes away from homes.
“One things people can do is keep their grass cut,” Borel said. “Her grass was cut, but it got in there anyway. Snakes move around a lot once it starts raining,””
“There has been a lot of rain, so that might have been the reason the snake was there,” Godbolt said.