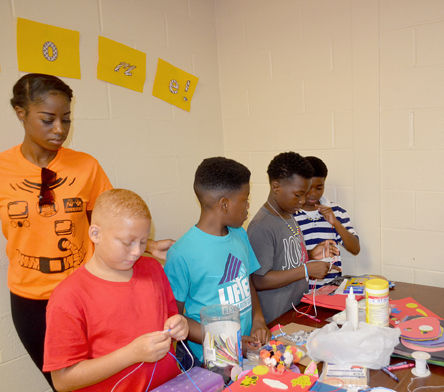 The camp was for children kindergarten through ninth grade. The camp’s focus was to teach children how to be leaders in the community, according to Camp Director Joiya Smith, a 2012 Bogalusa High School graduate and current Miss Grambling State University, who is entering her senior year.

The camp theme was “2 Infinity and Beyond in Honor of Year 2.” Stars, rockets and planets decorated the school auditorium.

“The theme was meant to encourage the kids to go as far as they possibly can and not limit themselves,” Smith said.

Smith said she was pleased by the camp’s growth. There were 150 campers last year.

“Growth and progress are always a good sign. I am pleased with the growth,” Smith said. “God gives you what you can handle. It’s not like I had a goal to meet or impress somebody. It was strictly to give back and enjoy these three days with the kids.”

One small difference in this year from last was campers from outside Washington Parish were welcomed.

“We do have kids from other schools participating in the camp,” Smith said. “Primarily 98 percent of the kids last year were from Bogalusa City Schools. It’s about 70 percent this year.”

Smith said some parts of holding the camp are more pleasant than others.

“The background work is not all that enjoyable, but to see the kids having a great time makes it all worthwhile,” Smith said.

Smith was assisted once again by volunteers, including her mother, Veronica, and fellow 2012 BHS graduate JaMya Magee, who was recently selected Miss Southern University.

“So far, the Miss Grambling State University role has been very eventful,” Smith said. “I have already been to Savannah Ga., for a leadership conference. This past weekend, I was in Detroit for an alumni fundraiser. It’s great to be an ambassador of goodwill for my university.”

Smith returns to school on Sunday. She is majoring in digital art with a concentration in graphic design.