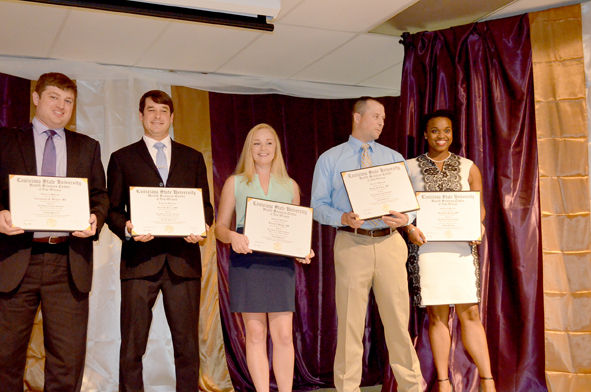 It was announced Harvey, Ogden and Phelps will remain in Bogalusa to practice. Picou plans to work in Hammond, while Whipple will be in Slidell. Yalamanchili will practice in Zachary.

Phelps also received three special awards. She received awards for Educational Excellence, Most Professional and the Program Director’s Award. Harvey received the Exceptional Character and Compassion Award, while Ogden earned the award for Exceptional Leadership. Dr. Madeline Nguyen was the recipient of the Significant Achievement Award and Ogden was awarded the Chairman’s Award, as voted on by the graduates.

Dr. Ghulam Arain was commencement speaker. A native of Pakistan, Arain has practiced medicine in Louisiana since 1999 and has worked as a hospitalist since 2006. He completed one year of transitional residency at Hurley Medical Center in Michigan, and then completed four years of combined internal medicine/pediatric residency from Maimondes Medical Center in Brooklyn, N.Y.

Two new chief residents were announced. They were Daud Noaz and Jay Umarvadia.

During his speech, Arain talked about healing the mind, body and spirit. He also touched on how poverty affects lives.

“My vision and hope is that we will train our physicians who are well educated in modern day medicine,” Arain said. “Our new physicians will also be very well advanced spiritually. There is physical illness and there is the spiritual side of us.”

He said poverty is rampant.

“The biggest disease in our community, in our city, in our country and all over the world is poverty,” Arain said. “I am sure everybody has an idea how to wipe out poverty from Bogalusa. My idea is if our political leadership can help Bogalusa get direct access to Interstate 12, it will help to bring more business to our community and help boost economy to fight the dark cloud of poverty in our town.”

“I request our community leaders and community in general to continue to support Our Lady of the Angels Hospital so we can continue to provide care, meet health care needs of our community and surrounding communities. I believe with the help of our local community, local physicians and hospital leadership we will become a center of excellence in health care.”

On March 17 Our Lady of the Angels Hospital celebrated its one-year affiliation with the Franciscan Missionaries of Our Lady Heath System. Previously, the facility was known as LSU Bogalusa Medical Center, a division of LSU Health Care Services.

Arain said graduates have received an honor from God.

“Becoming a physician is the greatest blessing we have. This is the highest and the best privilege God has granted us. Respect, protect and honor this privilege and great gift from God.”

Arain said graduates should thank the Creator in prayer for allowing them to become a physician. By practicing medicine, Arain said physicians are in the presence of God.

“By practicing medicine, we are not trying to cure death, but to bring hope and healing,” Arain said. “If heavy hearts, hopelessness and sickness leave from your presence with comfort and relief, you have done a good job. We need to heal the physical body and nurture the soul at the same time.”

“Try to change what you don’t like. Think big and do not be the prisoner of your own fear,” Arain said. “If you can convince yourself what you can be, you will become what you want to be.”