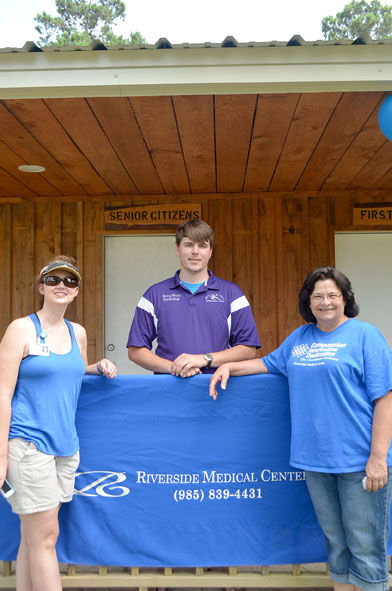 The Longest Day event was to benefit and promote Alzheimer’s awareness and research. A total of $1,150 was raised during the day.

Activities during the event included a 5K race, judging of classic cars and motorbikes and a free concert by The River City Hit Squad from Hammond.

Todd estimated approximately 100 people came to the fairgrounds before the band took the stage at 6:30 p.m.

“It’s been an exceptional crowd with a supportive community,” Todd said. “Riverside Medical Center was set up to do blood pressure screenings. Riverside is our Gold Level sponsor. I hope we can continue to promote awareness and education of Alzheimer’s Disease to the Washington Parish Community in the hope of a world without Alzheimer’s becoming a reality.”

Todd said profit is not the bottom line.

“We put awareness over funds,” Todd said. “As president of the organization, I feel we have met the goal of awareness by the crowd we have drawn. More good things are to come.”

Raynell Bufient was overall female winner. He time was 26.32. Harley Freeman placed second with a time of 32.15.

Third place in the car show was a 1968 Chevrolet Camaro owned by Franklinton’s Mark Bott. In addition, the car earned the Best in Show designation.

Fourth place was awarded to a 1972 Chevrolet Nova owned by Harold Corkern of Franklinton.

“Over 5 million Americans have Alzheimer’s, and two out of three patients are women,” Todd said. “That costs our nation over $214 billion. The cost of Medicaid and Medicare is expected to top $1 trillion by 2050.”

Todd said the number of Louisianans with the disease is staggering.

“Some 82,000 Louisiana residents have Alzheimer’s according to the Alzheimer’s Association, the world’s leading volunteer health organization,” Todd said.

Todd said Saturday’s event could not have been possible with out volunteers. Todd said they included Melody Posey, Mike Todd, Pam Taggart and stepdaughter April and Maud Morris and her daughter, Priscilla.