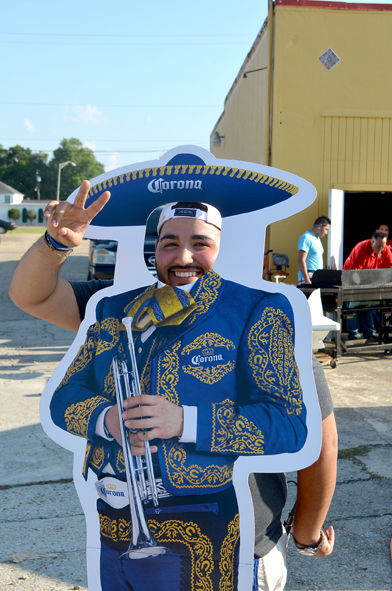 The Eli Seals Band played in the median. Businesses offered food and drink specials from 5 to 10 p.m. For the most part, merchants said they didn’t see the large crowd they had hoped for but were thankful for a nice turnout.

“Most everything was good Friday night. We expected a bigger crowd, but what we had was good,” Yoyo’s Bar and Grill Manager Ozy Martinez said. “I thought it was a pretty good turnout for us. We can’t complain about beer sales and food because both sold well.”

Yoyo’s offered hamburgers and hotdogs cooked outside on a grill.

“Hamburgers, hotdogs and our famous pork tacos sold well,” Martinez said. “All the people were happy. We’re looking forward to the next one.”

The next block party along Louisiana Avenue is scheduled for July 10 from 5 to 10 p.m.

Calvin Hymel, whose Coach’s Po-Boys is located beside Union Square Daiquiris at 400 Mason Drive, said he sold out of jambalaya and white beans and shrimp.

“I thought Friday went great, but I thought the crowd would have been a bit bigger with Eli Seals playing,” Hymel said.

Hymel offered his thoughts for the smaller-than-expected turnout.

“It was mighty hot at first, but once the sun went down it was nice,” Hymel said. “Our tables stayed full. That was the main thing I wanted to see. I just want to thank everybody for coming out. You almost have to be looking for my place to find me. Business has been picking up really good now that people know where I am.”

“It was a little slower than the last time, but we had a good crowd,” Miller said. “Everything went smoothly.”

Normal business hours for the Golden Pear are from 10 a.m. to 2 p.m. Monday through Saturday, and 11 a.m. to 2 p.m. on Sunday. The business remained open until 9 p.m. Friday.

“I think it was a successful night,” Chrissy’s owner, Chrissy Nicolais, said. We had a lot of people who came in and had a good time.”

“Friday went well. Everybody had a good time, and all the businesses did well,” Jenkins said. “We’re hoping for a better turnout for each one. I think we had a little bit more people show up this time than last time.”

Jenkins said the Itchy Dogz, which feature Bogalusa natives Joel Galloway and Bobby Breland, will provide musical entertainment during the next event on July 10.

Louisiana Avenue merchants hosted a similar event on May 1.