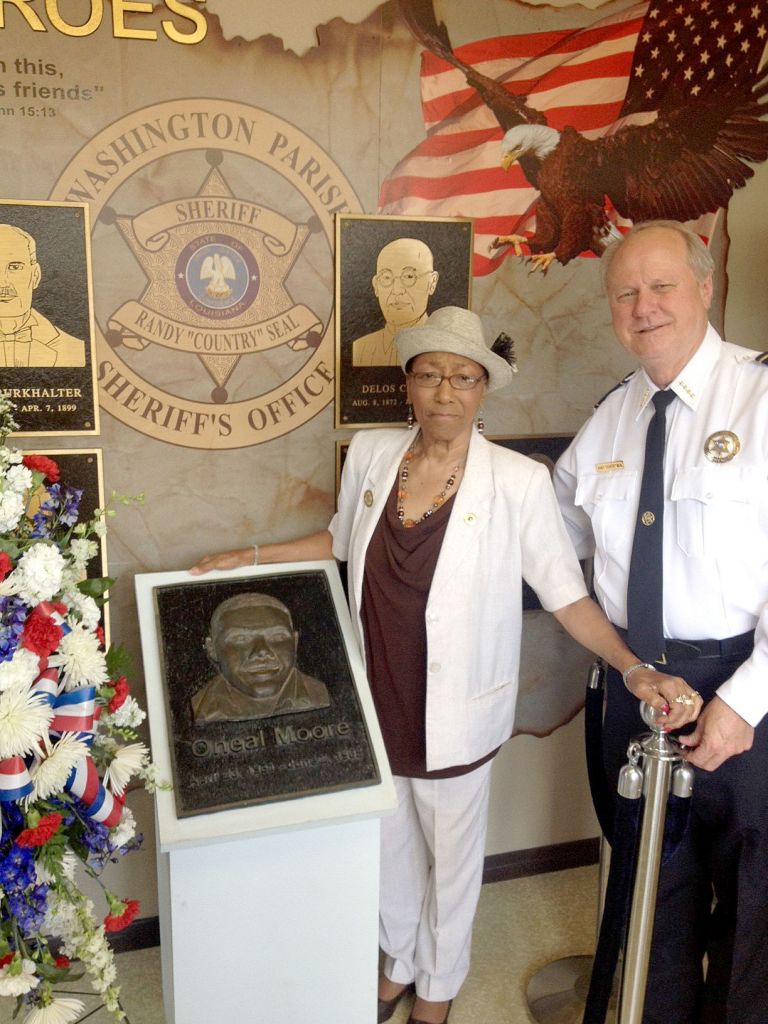 Moore was on patrol with his partner, Deputy David “Creed” Rogers, when the pair was shot from ambush by unknown assailants. Moore was killed and Rogers was injured. The case remains unsolved.

“The ceremony today was nice,” Maevella Moore said Tuesday. “It was very pleasing. There was a good crowd. And there were all those beautiful flowers. I got a beautiful bouquet.”

Moore still lives in Varnado. She attended the ceremony with her caregiver, Gabriel Harry.

In his remarks to the late morning crowd, which gathered in front of the Sheriff’s Office, Seal reminded everyone present of the ultimate sacrifice made by Moore and his family.

“This was a cowardly deed that brought devastation to the Moore family. In spite of their tragic loss, they have persevered and continue to be one of the finest families in our parish,” Seal said. “While we cannot erase the past, we can continue to work together to improve the future.”

Moore was a U.S. Army veteran and had served with the Washington Parish Sheriff’s Office for one year. He was 34 years old at the time of his death and was survived by his wife and four young daughters.

Lisa Frazier Page currently works in the office of District Attorney Warren Montgomery. A Bogalusa High School graduate and a longtime family friend of the Moores, she offered her thoughts on Moore’s recognition.

“I’m writing on behalf of my lifelong friend, Tresslar Moore, who will join her family in paying tribute to her legendary father, the late Oneal Moore, on Sunday, June 7, at 2 p.m. at New Zion M.B. Church in Varnado. Mr. Moore was one of the first two black deputies for the Washington Parish Sheriff’s Office when he was murdered on this day 50 years ago. He was on his way home from work when a pickup truck with a Confederate flag decal pulled up beside his patrol car. One of the occupants unleashed a barrage of gunfire. Mr. Moore was killed, and his partner, Creed Rogers, the other black deputy, was seriously injured and blinded in one eye,” Frazier-Page said. “Nevertheless, Mr. Rogers was able to radio in a detailed description of the pickup truck.

“A suspect was stopped in a vehicle fitting that description shortly after the crime, but he was never charged,” Frazier-Page said. “Though the crime remains officially unsolved, it has always been believed that Mr. Moore was murdered because of his race.”

Frazier-Page said the area during the Civil Right era was rife with trouble.

“Washington Parish was a hotbed of Ku Klux Klan activity, and the city of Bogalusa was in the midst of a tumultuous civil rights struggle that had pushed for the hiring of the black deputies,” Frazier-Page said. “The FBI has reopened the case at least three times, but the prime suspect, who was a known white supremacist, died in 2003.”

After her husband’s death, Maevella Moore, was left to raise four daughters, who ranged in ages from 9 months to 9 years old at the time of their father’s death.