Bogalusa native tells of experiences with the national space program 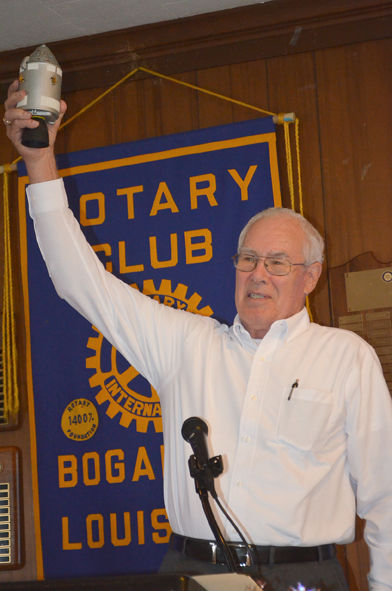 Chuck Statham had one of those jobs every little boy dreams of.

Statham worked on development of the Apollo space program in Houston. His last official title was program manager that focused on payload cargo integration for Rockwell International.

A Bogalusa native, Statham talked about his years of service with the Apollo space program at Tuesday’s Rotary Club meeting at Bogalusa Country Club.

Statham began his career with Chance Vaught Aircraft the same year in the aerodynamics department. He relocated to southern California in 1962 to join North American Aviation on the Apollo Program.

Statham’s first job in the aerospace field was at Chance Vaught Aircraft in 1958. He was there for four years. He helped build Corsair airplanes for the U.S. Navy and Marines.

“You might remember the Black Sheep television show with Pappy Boyington,” Statham said. “They flew Corsairs. There were almost as many Corsairs as there were P-51 Mustangs.”

The company had two major contracts when Statham went to work there. Part of his job assignment included work on the cruise missile program.

President John F. Kennedy made his speech in May 1961. Vaught didn’t win the Apollo contract, but it was awarded to North American Aviation. Statham relocated to southern California in 1963 and went to work for North American.

Statham was in charge of establishing thickness requirements and temperature of the heat shield and inboard subsystem.

“The heat shield got as hot as 5,500 degrees Fahrenheit,” Statham said. “The whole vehicle was engulfed in flame.”

Statham retired from Rockwell in 1992. He returned to Bogalusa in 1997.

“It was one of those things that if I had to choose a career path, I don’t think I could have done any better.” Statham said.