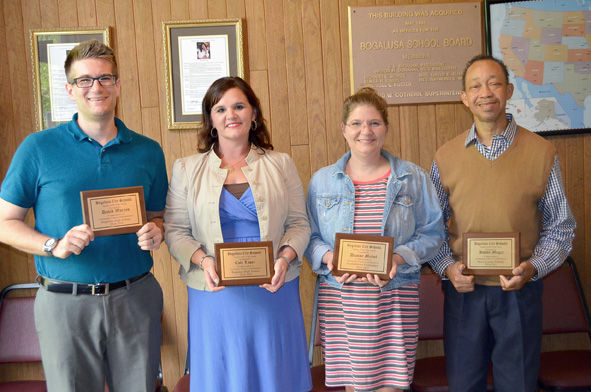 Just before the end of Thursday’s Bogalusa City Schools Board meeting Thursday night, Board member Calvin Hymel said his desire was to see improved morale from teachers next school year.

“It’s the lowest morale at the high school I’ve ever seen,” Hymel said. “Let’s not wait until August to do something about it.”

Superintendent Willie “Toni” Breaux said something is being done.

“I started on it today,” Breaux said. “I am well aware, Mr. Hymel, we have some serious concerns.”

Breaux said she recently received 65 concerned messages at the high school from teachers.

“I called in principals and administrators and went over the concerns,” Breaux said. “I told the administrators you have to establish a relationship with teachers. We want to stop playing the blame game and work this out.”

The district recognized its 2014-2015 Teachers of the Year and other school-related officials Thursday night during its regular board meeting.

“She is always going above and beyond. She is our resource teacher, but she is everywhere,” Mingo said.

“She’s had the highest pass rate for the last several years,” Moses said. “She does an excellent job.”

“He is an outstanding music teacher,” Lawrence said. “He’s probably the best I’ve ever seen. “

“Today during our Honors Awards Ceremony, the students — without prompting — yelled in unison, ‘We love you Mrs. Loper.’ She will be missed,” Nobles said.

Warren is in his second year at Bogalusa.

“In only his second year as a teacher, he was selected by his peers to receive this award,” Nobles said.

Pauline Toney was awarded the Manager of the Year. She has been a manager since 2000. Darrell Smith was named Technician of the Year. He will be going to the high school next year from Central Elementary.

In business matters, the board approved leasing a Canon printer for $129.

Also, board members approved an access agreement between the district and the U.S. Marine Corps for use of the properties at Long Avenue, Pleasant Hill and Superior Avenue for military exercises during July.

The board also approved a Food Service Management Technology agreement with Meals Plus. Randazzo said the new system has added features that the old program did not have.

“This will allow for closer monitoring and elimination of waste,” Randazzo said.

Personnel Director Karla McGehee said the district has hired 10 new employees, including six teachers. They are Tammye Stewart and Brenda Martin at Byrd Avenue; and Rachael Galloway, Aimee Richard, Kenneth Matthews and Jolene Sampson at the high school. Matthews is also a coach.