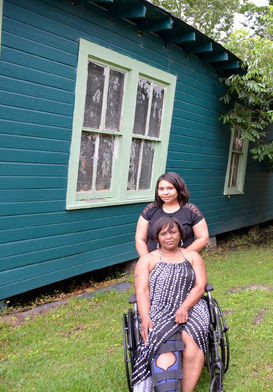 A Bogalusa woman is searching for assistance from anywhere and everywhere since the roof of her home recently collapsed and ruined all her possessions.

Patrina Brown lived at 424 Superior Ave. until the roof of the four-bedroom, two-bath residence caved in approximately two weeks ago. She is currently living with her daughter, Kelly Brown. Response for assistance has been slow, but she has enlisted the help of District A Councilwoman Gloria Kates.

“I have called everyone. Either they can’t help with the problem or they don’t have the funds,” Brown said Wednesday afternoon. “They give me phone numbers to call. I’m just at the point of giving up.”

Kates might have found some assistance when the Local United Way suggested Kates contact the Archdiocese of New Orleans’ Northshore Pastoral Center and Catholic Charities.

Brown’s problem is exacerbated by the fact she fractured her right leg when she jumped out of the house just before the roof caved in.

“Me and my daughter were on the front porch getting ready to lock the door. You could hear the roof caving in. I jumped off the porch, and that was how I fractured my leg,” Brown said.

“I know it’s rained a lot since I’ve been in this house,” Brown said. “I know it’s an old house, but the roof has never caved in before. Unfortunately, I didn’t have insurance.”

Brown, who is recently divorced, has four grown children. She said family members are pitching in to help her. She currently is unemployed and most recently worked as a certified nurse assistant and a housekeeper at Covington’s Homewood Suites.

“I hate to sit at home,” Brown said. “I don’t like being dependent on anybody.”

An account to assist Brown is in the process of being set up at Resource Bank.