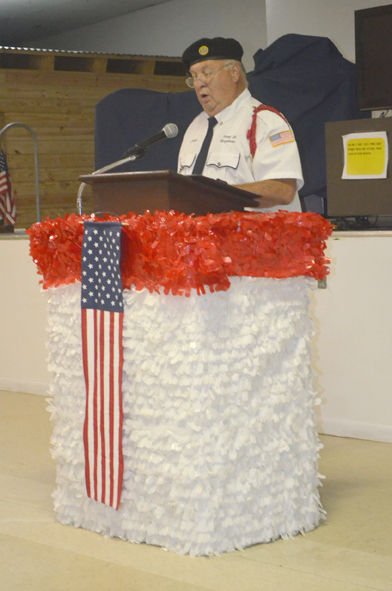 The Memorial Day gathering at Pool’s Bluff overlooking the rushing waters of the Pearl River, managed to dodge the day’s frequent bouts of rain and cast a somber yet celebratory scene painted in varying shades of red and blue.

During the event put on by the Washington Parish Republican Committee, veterans lucky enough to have made it home paid tribute to their fallen comrades, and every veteran present introduced him or herself to the crowd gathered near the monument erected in memory of Cpl. David “Bear” Stewart, the Bogalusa man who was killed while serving his country in Iraq in 2005. Two of the area’s most storied veterans, L.C. and Hubert Terrell, both survivors of the D-Day invasion, then laid a wreath upon the memorial.

One of the most poignant moments of the short program was the reading of the Gettysburg Address by Larry Miller. Although most have heard the words many times, the context imbued it with a meaning not readily evident in the classroom.

Memorial Day activities wrapped up around the parish on Monday with a program at the American Legion Hall.

“In preparation, I reviewed several articles on Memorial Day, but mostly the words I speak today are mine as are the views I express,” Smith said. “Today is Memorial Day 2015, and ceremonies have been held in Washington, D.C., where the president placed a wreath on the tomb of the Unknown Soldier and said some inspiring words as he honors the fallen members of the military. It is right that he do so, but I wonder in my heart how meaningful his words will be since he and many leaders of our nation have never spent a day in uniform,” Smith said.

“In fact, only a small percentage of our present day population have served their country in uniform. Some of the major universities are having trouble filling the classes of the ROTC programs that they offer,” Smith said. “Nine out of 10 high school students surveyed says they have no interest in serving in the military. Most mothers don’t want their children to join the military ranks.”

Smith offered reasons for the decline.

“One reason is that we have fewer and fewer veterans to share their stories and experiences,” Smith said. “And many of our older veterans, the ones who are left from WWII and Korea, often don’t talk about their service. Many Americans do not have any relatives or even neighbors who serve now or have ever served in the military. In fact, many Americans today have never even met a soldier.”

“I think the main reason is that we all want the good life and can’t wait to get it,” Smith said. “We want to enjoy the high-salaried jobs, the long holiday weekends, the musical concerts, the visits to Disneyland, “Monday Night Football,” cookouts, visits to the shopping malls and all the other privileges that freedom offers. No one takes time to consider what it takes to get and maintain those freedoms.”

Smith quoted President George Washington: “Washington once stated, ‘By keeping up in peace a well regulated and disciplined militia, we shall take the fairest and best method to preserve for a long time to come the happiness, dignity and independence of pour country.’ The prophecy of those words has been fulfilled time and again.”

Smith addressed why soldiers are willing to go to war and fight for the country.

“The answer to that question is as simple and yet as complex as the soul of America itself. We fight because we believe, Not that war is good, but sometimes it is necessary,” Smith said. “Our soldiers fight and die not for the glory of war, but for the prize of freedom.”

Perrette’s message expressed gratitude to those who served.

“We observe Memorial Day today with grateful hearts. Generations of heroes have been willing to make the ultimate sacrifice so that we can enjoy the freedoms,” Perrette said. “Generations of families have given their loved ones for freedoms we enjoy. Once again we are reminded that freedom is not free.”

“Memorial Day is many things to many people. It is a day of relaxation and fellowship for some,” Perrette said. “We must remember that foremost Memorial Day is a day of opportunity to remember and be thankful for those who gave their lives so we could enjoy the many blessings we have. It should also be a day we rededicate ourselves to our country and to the memory of America’s veterans and their families and the sacrifices they and others have made. Their sacrifice makes us able to enjoy Memorial Day and every other day in freedom.”

Perrette said she appreciated the community support for the veterans.

“I am proud to see so many of you here today as we come together as a community to pay homage to veterans, to those who gave their lives for their country and to families who have only their precious memories. Our traditions are important and your participation in them makes them meaningful. When I attend an event like this my belief in the beauty of our country and in the beauty of our Bogalusa is refreshed.”