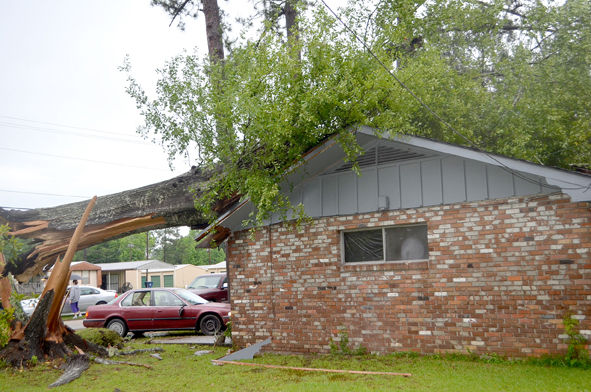 A huge oak tree, which measured approximately 36 to 40 inches in diameter, fell across a house on Ontario Avenue in Bogalusa early Tuesday morning but caused no injuries.

Tommy Hall and his wife, Chinese, were sleeping at the time the tree fell at approximately 4:20 a.m.

“I heard something hitting the front door. I thought it was somebody knocking,” Tommy Hall said. “I opened the front door, and the wind blew me back. I ran back to the bedroom to get her up. We took two steps, and the tree came through the roof.”

Hall, who is employed at City Glass in Bogalusa, said the rain came in and soaked everything.

“I think a little tornado came by here,” Hall said. “You could just hear it. I’ve got to find me a place. The rafters came through the ceiling, and everything is soaked.”

Hall’s landlord, James Barber, was on the scene to assess the damage.

The National Weather Service said there were no reports of any tornado activity in the area early Tuesday morning but said straight line winds had gusts of 50 miles per hour.