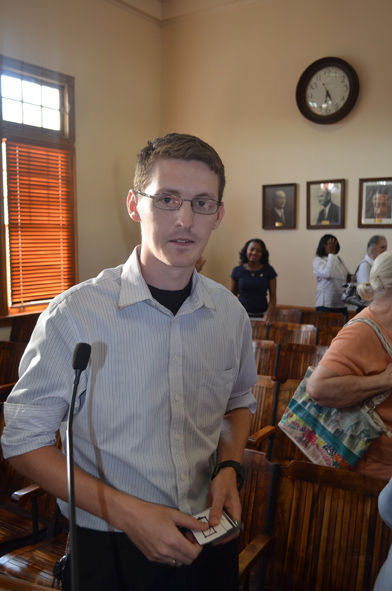 During Tuesday’s public participation segment of the Bogalusa City Council meeting, a citizen’s concerns and allegations over the safety of the city’s drinking water had everyone’s rapt attention.

Game designer John McNabb said on his visits to the Public Works Department, personnel were often too busy viewing private Internet sites to assist him. He addressed the City Council from a prepared statement.

“This is a waste of taxpayer money, disrespectful to the citizens that fund these positions, and potentially dangerous for the technological infrastructure as many of these unsafe shopping sites contain malware and root-kits capable of infecting and damaging the internal network of the city of Bogalusa,” McNabb said in the statement. “For too long I’ve overlooked these lacking standards as mere small town charm, but recently a lack of professionalism resulted in a potentially dangerous risk to public health and safety.”

McNabb said he discovered the problem from correspondence with the city.

“This past week I received in the mail a brief letter explaining how our water was found to be contaminated by an excessive amount of choliform bacteria. Upon further research, it has come to my attention that on April 1, 2015, multiple samples of local water came back as having an excessive amount of choliform bacteria present and as such our city was in violation of state regulations. Coliforms can be found in the aquatic environment, in soil and on vegetation; they are universally present in the feces of warm-blooded animals. While coliforms themselves are not normally causes of serious illness, they are easy to culture, and their presence is used to indicate other pathogenic organism of fecal origin may be present. Such pathogens include disease-causing bacteria, viruses, or protozoa and many multicellular parasites.”

McNabb offered his theories for the alleged contamination.

“I can only think of three ways these samples could have been contaminated as I have worked for organizations who had to perform these tests and know what protocol is required,” McNabb said in the statement. “Option one is the vials used for the samples were improperly stored and resulted in a contaminated sample. Option two is the person taking the sample was so severely lacking in personal hygiene that merely touching the vials contaminated the sample, or option three, and most disturbingly, the water itself was not properly treated and was contaminated before it ever reached the vial. Either instance, someone is responsible for a potentially dangerous health risk to thousands of innocent men, women and children within the city of Bogalusa and as such, should be held accountable.”

McNabb offered his thoughts on correcting the situation.

“I propose three simple solutions to help get things back on track, increase productivity and deter any potential health risks resulting from lack of standards. I propose that an Internet block be enacted network-wide across Public Works computers, routers and firewalls so that only URLs conducive of business are allowed to be accessed. I propose a formal investigation of the cause of the contamination to our water samples, and I call for the immediate resignation and termination for all parties involved with actions resulting in the contaminated samples. Some people will see this as drastic, but to them I ask simply, ‘Is your child’s or family member’s health worth the risk so someone can kick back at their job and not follow protocol?’”

Bogalusa Superintendent of Utilities Don Jones did not attend the meeting but said Wednesday protocol is always followed and dismissed McNabb’s claims.

“We take 15 samples per month. This just wasn’t one sample,” Jones said. “We take routine samples to the state lab in Amite. We have a new monitoring system plan, and we go by exactly what the state says.”

“We test every entry point into the city. Every time we take a sample, we flush that sample faucet, chlorinate it and clean it with bleach,” Jones said. “My men’s hands are always clean. There is a special tray for the bottles, and it is kept cool. We take the bottle straight from here to the lab. We did test the next day and found no positive samples.”

Jones said the general public doesn’t realize what all is involved.

“There is a lot more to it than he thinks there is,” Jones said. “We sample daily ourselves.”

In other business, Councilwoman Gloria Kates read a letter from consultant Byron Stewart explaining his desire not to work with the city. The council hired his firm on May 5 at a reduced rate not to exceed $5,000 to write grants and for his expertise in business and legislative matters.

“We’re not going to make special arrangements for anybody,” Mayor Wendy Perrette said. “We could not cut him a check when they wanted us to. There are procedures and policies in place.”

“We are very proud of you all and hope you come back and practice your profession,” Perrette said.

Long-time council-watcher Fate Ferrell requested the council have property at 1402 Sullivan Drive cleaned up. Ferrell lives nearby on Dewitt Street. The late Marvin Brumfield owned the property. Nobody on the council knew who the current property owner is.

Barbara Hicks-Collins said a fundraiser for the proposed Bogalusa-Washington Parish Civil Rights Museum is scheduled for June 27 at B&C Hall on Cumberland Street. Tickets are $50. Dress for the four-course meal is semi-formal.

“We need to start recruiting young, black men in our community for the police department,” Austin said.

A number of ordinances were introduced. They will be voted on after public discussion n June 2. They included:

• An ordinance to amend and re-enact the city’s Comprehensive Building Regulations in relation to building codes;

• An ordinance authorizing Perrette to lease the building at 411 Industrial Park to General Dynamics Information Technology. It is a renewal of a three-year lease;

• An ordinance authorizing Perrette to enter into a lease agreement with The New Dimension Fellowship Center and repealing any and all ordinances that conflict with the deal;

The City Council voted to postpone an ordinance to set ad valorem tax rates as well as one authorizing Perrette to contract with ARE Consultants for work on the runway at George R. Carr Airport.