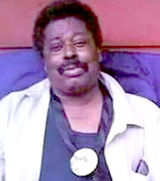 He was preceded in death by his mother and father, Clemmie and Audrey Martin Johnson; and one sister, Audrey Hudson.

Visitation will be held on Saturday, May 23, 2015, from 9 a.m. to 11 a.m. followed by a funeral service beginning at 11 a.m. at Crain and Sons Funeral Home Chapel in Bogalusa, with the Rev. Stanley Nathaniel officiating. Interment will be held at the Bogalusa Cemetery. Crain and Sons Funeral Home is in charge of arrangements. Sign the guestbook at www.crainandsons.com.