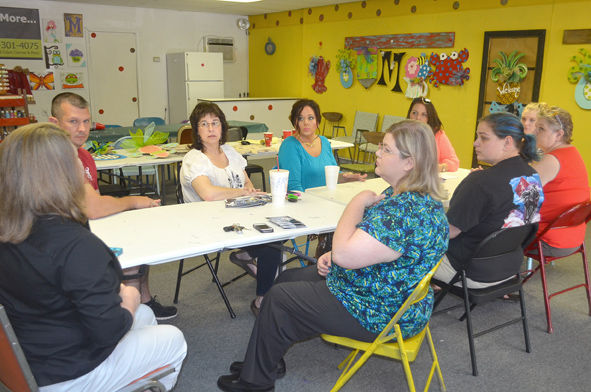 A group of Columbia Street merchants met On Tuesday to finalize plans for the Friday, May 22, Rendezvous on the Road.

Friday’s Rendezvous on the Road is scheduled from 6 to 9 p.m. at the 400 block of Columbia Street. Music will be provided by Bogalusa natives Erwin Bankston and Keith Alford, known as “The Itchy Dogz.” Keenan Knight played at the last Rendezvous.

Bogalusa City Councilman-at-large Teddy Drummond is in charge of organizing the merchants for Rendezvous.

Public participation at the last month’s Rendezvous was reportedly down after the city eliminated its popular Main Street Program, which was in charge of the block party under the direction of Main Street Manager Robin Day.

Friday’s Rendezvous is expected to have a few changes with the addition of favorites like cotton candy, soft drinks and snowballs available for purchase. Children’s jumpers will be in the green space near The Daily News office.

“We’re trying really hard to bring families in. There’s a huge variety of businesses up here, and we don’t want to leave anybody out,” Hughes said. “Businesses are still here on Columbia Street, and the merchants have banned together to keep Rendezvous alive. We’re trying to keep the momentum up. A lot of theses businesses really depend on that Friday night, and we don’t want to see that changed. We want it to be the biggest and best Rendezvous ever by including family-oriented activities.”

Representatives from Gayle’s Jewelers, Mimi’s Munchkins and 437 Restaurant said they are working on specials.

“Friday would be a good chance for old friends and classmates to come out and show support or just to say hello and reminisce,” Drummond said. “I’m just glad to be able to help. I hope the people come out and make it a success. If you’re not careful, you might come out and have some fun.”