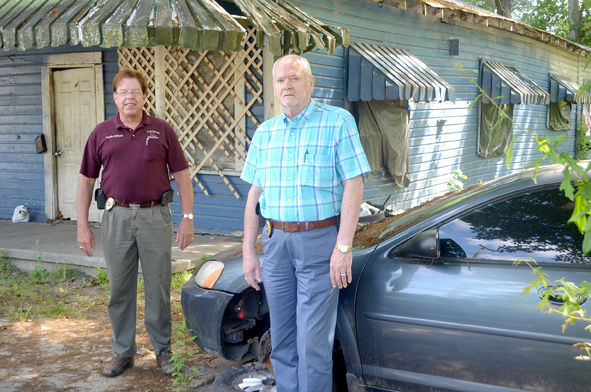 To hear some complaints during the public participation segment at Bogalusa City Council meetings, enforcement of code violations in the city has been extremely lax.

Bogalusa Mayor Wendy Perrette said she saw fit to help Code Enforcement Officer Rodney McGehee do his job in working the 10.5 square miles of the city. Retired banker Kelley Sharpe was hired to help McGehee on a part-time basis. McGehee has worked alone for the past 13 years.

“On average, there were approximately 18-20 code violations written per month,” Perrette said. “With this restructuring of the department, we had a total of 80 violations in April. These men have teamed up to become a dynamic duo.”

“When it comes to paperwork, Kelly is very organized dealing with personal property,” Perrete said.

“I appreciate Mayor Perrette giving me some help,” McGehee said. “There is a process to go through. You have to give people a certain amount of time to clean up their property. It’s a slow process. Hiring Kelley gives me time to have face-to-face meetings with people once they’ve been notified.”

Perrette said cleaning up the city is a priority.

“Beautifying our city is important to me,” Perrette said. “It’s an old city. The last administration started enforcing enforcement codes, and this administration plans to continue enforcing them.”

“That is a 95 percent increase from the previous month,” Perrette said. “These men are doing a great job. It’s not easy passing out code violations. Cleaning up our city is very important to me. If you see somebody littering, turn them in.”

McGehee said future campaigns call for residents to affix numbered addresses on their homes to assist emergency personnel in finding them and removal of all political and garage sale signs from neutral grounds.