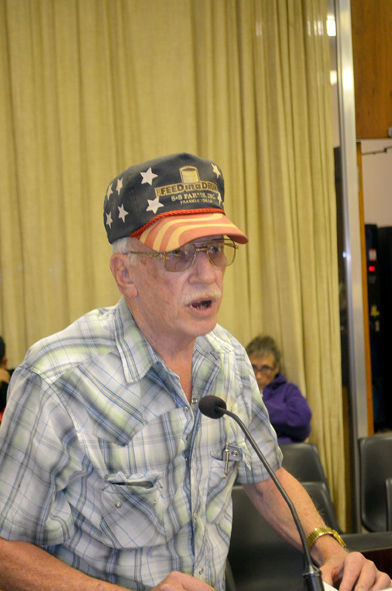 The Reservoir Project is proposed for the Oak Grove Community in the center of the parish. Winford Pittman read a statement proposing consolidating the Washington Parish Reservoir District under the auspices of parish government.

“The Louisiana Constitution, Article 6, Section 16, is surprisingly written in plain language,” Pittman said. “However, you have to watch for key words like it said ‘any special district.’ The key word here is ‘any.’ I will not lie to you. There will be opposition to this by Sen. Ben Nevers, Rep. Harold Ritchie, and of course, by the Reservoir Commission, and most likely some of your campaign contributors who will lose money if we merge the District under the Parish Council.”

“One of the most important questions we should be asking ourselves is how would this consolidation benefit our parish? I will give you two benefits. The merger will take Washington Parish out from under the control of two types of governments, one which is democratic and accountable to the voters of the parish; the other is an appointed commission with little to no accountability to anyone,” Pittman said in the statement. “Putting it back to where it belongs, under the control of a democratic government, accountable to its citizens. You will at some point clash and the people of the parish are the ones who will lose in the end.”

“As it says in the Constitution, Article 6, Section 16, when we consolidate, all of the District’s assets will got to the parish government,” Pittman’s statement said. “The Reservoir District has been receiving through Priority 1 and Priority 2 $1.2 million for at least 10 years. They have, according to their reports, invested this money so no one but the Reservoir District knows how much they have. Also, you will receive any property they may have acquired. What do you think we could do in regards to the infrastructure of this parish with that kind of money?”

Pittman presented Council attorney Wayne Kuhn a Supreme Court case in which a parish, which had consolidated a Special District, was suing to get the revenues it said it was supposed to receive.

“I use this as proof consolidation of a Special District can be done and of what I said about the local government gets the District’s assets,” Pittman said. “Like I have told you before, you have more power to help people than we may realize.”

The Council adopted a resolution drafted by Kuhn to request an opinion on the matter by Louisiana Attorney General James Caldwell.

Washington Parish Library System Director Al Barron said the fight to keep the library afloat is not over, even after parish residents overwhelming approved renewal of the 4.6 mills in the May 2 voting.

Barron said passage of the inventory tax on Oct. 24 would be bad news for libraries.

Barron said he hates to always be the bearer of bad news.

“I hate to sound like Chicken Little, but the sky has been falling, and the Jindal administration — instead of seeking the authority to do those things that should be done — is seeking to attack and raid funds from wherever it can,” Barron said. “There are some catastrophic things that could happen.”

The council adopted a resolution to extend trash collection contract with IESI Corp. for one year.

Council members also adopted a resolution authorizing the body to apply for and administer a $50,000 grant though the Office of Community Development – Community Water Enrichment Fund. The city of Bogalusa has applied for the same thing. Bogalusa would receive more funds through the parish government’s efforts.

Along with a $25,000 grant from Parkway Pipeline, the Poole’s Bluff Nature Project was funded through by an $89,300 federal Recreational Trails Program Grant administered through the Louisiana Department of Culture, Recreation and Tourism.

“We are proud of this pier project. It’s the first of its kind in recent memory,” Lucchesi said. “This affords the public access to a convenient location for a scenic view or to drop a line into the waters of the Pearl.”