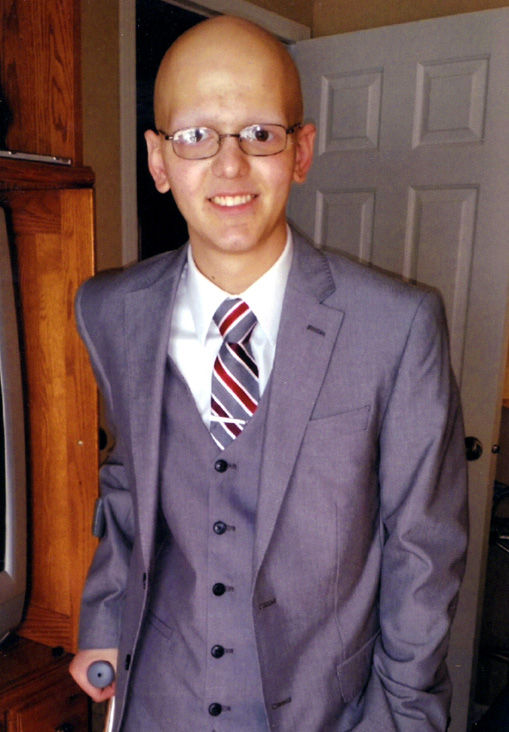 It really is all about the attitude, and Allen Barber has a great one.

Born premature into a family of strong believers in Jesus Christ, Allen came out fighting. His life was covered in prayer from the start, and his accomplishments are many.

He absolutely amazes with his exceptional musical ability. At the young age of 19, Allen’s first CD is reportedly up for a Dove Award this year. His musical ability and poise on stage delight all that have the pleasure of hearing him, but this is only a small part of Allen’s story.

He noticed something askew in his body but was too busy preparing for his first year of college to worry about it much. The pain he was experiencing intensified to the point it could no longer be ignored. Finally, Allen was diagnosed with a form of youth cancer. He stood up to this battle with a warrior spirit much as he did at his birth.

His resilience and reliance on God is nothing short of remarkable. Instead of spending his time wondering and worrying about his lot in life, Allen is busy living it. He spends his time glorifying God with his music.

The great love he has for music began at a very young age. His maternal grandfather, Lawson Chilling, recognized his grandson’s unique gift in music and made it his goal to see that Allen had every opportunity to pursue his passion. Many trips to piano lessons in Nashville and Atlanta, where he studied under Eloise Phillips, one of the greats in gospel music, helped to fan the flame in Allen.

According to Chilling, “Allen has been playing in church and the Calvary Harmony Quartet since he was 13 years old. He went to listen to the quartet, and the pianist couldn’t show up, so Allen stepped up. He has been doing the arranging ever since. He writes music and has songs published. I am so thankful that I had the means to give him lessons. When he went to Nashville to make his CD in July of 2014 I knew something was wrong. Thank God he is doing much better now. The time he spent taking treatments at St. Jude has allowed him to reach thousands. His Facebook ministry alone has reached around the world for Jesus.”

Chilling speaks tenderly of his courageous grandson with obvious pride in the man he has become. Ben’s Ford Baptist Church will soon gain a valuable addition to their staff when Allen moves into the position of worship leader and pianist for their congregation.

Jesus was described in the book of Acts as going about doing good. On Saturday, May 23, at 4 p.m. at ESM Methodist Church in Bogalusa, many people will be doing something good. Allen will give his time doing what he loves, praising the Lord through his music.

Admission price to this “Thanksgiving in May Celebration” with Allen Barber and the Calvary Harmony Quartet is canned food or a monetary donation to feed the hungry, so everyone attending or working behind the scenes will also be doing something very good.

The proceeds go to Bogalusa Help Center, allowing them to do what they do best, help those in need. ESM Methodist Church, located at 510 Avenue B, welcomes the public to this community event.