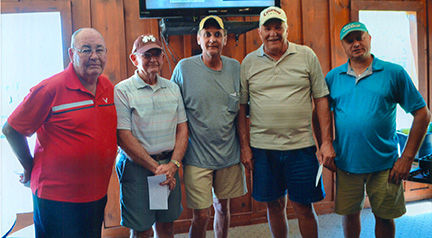 The Sink the Putt/Float the Boat Golf Tournament helped raise funds for a pair of venturer crews to attend the 49th annual White River Canoe Race.

The tournament had a scramble format and golfers played the best ball. The competition was close.

The team of Ralph Ferguson/Bobby Stephens captured the event after carding a 59. They won by just a stroke over Mack McGehee/Chris Evans.

Fred Rebstock/Mike Garic weren’t far off of the top spot either, as the duo finished with a 63 for third place.

The tournament was dedicated in loving memory to Dora Lee Mohon and Henry Clyde Blow.

Mack McGehee, who has helped with the tournament for all four years, said he is a huge supporter of the programs.

“Col. Miller has been involved with this for 40 years,” McGehee said. “The late Dora Mohon took care of the girls. These kids go on to be successful for the rest of the their lives. I hope the community realizes the importance of what Col. Miller has done and what Mrs. Dora did for these kids. I’m a huge supporter of venturer crew program.”

The White River Canoe Race is 120 miles long in Arkansas. It goes from Bull Shoals to Batesville.