Pollution not behind fish kill 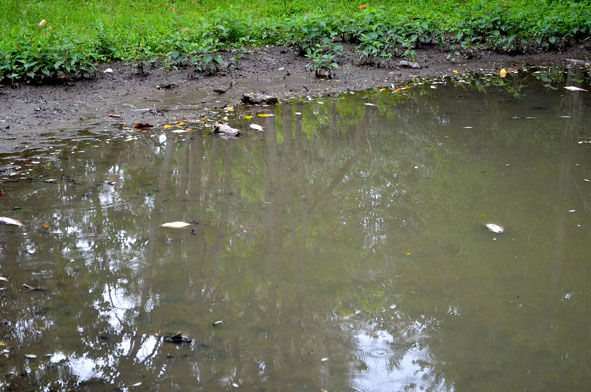 A lack of oxygen in the water from a combination of Monday’s rain and strong wind gusts probably caused this week’s fish kill in the lagoon at Cassidy Park, according to city officials.

Officials at the Emergency Operations Center in Sheridan said .75 inches of rain fell on Monday. They clocked wind gusts at 32 miles per hour,

“There is probably six feet of silt in the lagoon with but three feet of water,” Hall said. “Twenty years ago, we cleaned out all that silt, but since then, silt has built back up. The hard wind and rain like we had Monday stirs the silt up and takes all the oxygen out of the water.”

“The only thing we can do is build a bigger pond rather than a lagoon,” Hall said. “Our Master Plan is to make it a pond.”

Hall said he experienced a similar fish kill in 2005 when he was working at Lake Vista during a storm.

“We were cutting vegetation debris out there. When the storm came through, the water level rose and pulled all that freshly cut vegetation debris back into the water,” Hall said. “That took the oxygen out of the water. We called the Department of Wildlife and Fisheries, and they told us what happened. That is what makes sense to me as to what happened out at the park.”