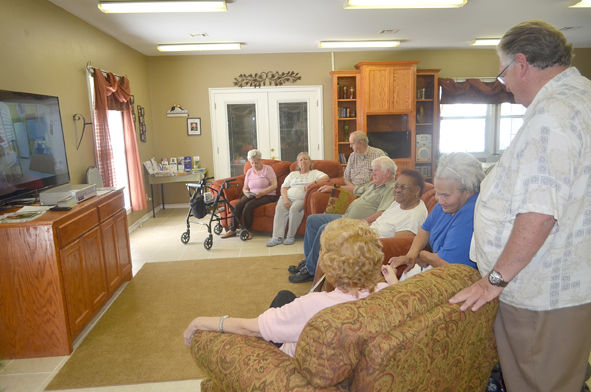 Movie night at Westminster Woods Apartments on Avenue F used to be dull and cramped.

But since an anonymous donor purchased a new 62-inch flat-screen color television to replace the old 22-inch version, movie night has taken on a whole new perspective.

Westminster Woods is an independent living facility. Facility Manager Frankie Blackwell said the new television is user-friendly for all residents who watch television in community room.

“A lot of our residents don’t see or hear well,” said Blackwell. “A private donor who didn’t want to be identified gave us the new television at the beginning of February. She ordered the television for us, and it was delivered here.”

Blackwell said residents are able to click on movie channels to watch their movies in an instant.

“All you do is press a button, and it goes to Netflix. At the press of a button, Netflix pops up for you,” Blackwell said.

Along with the movie, residents chip in for snacks like popcorn and soft drinks during movie night. She said donations for movie night generally are 50 cents.

“Every once in a while we’ll have residents contribute a small donation to help out with the snacks,” Blackwell said. “They understand they don’t have to contribute because this is their home.”

Blackwell said the new television is popular among the residents.

“The new television is easier for them to see,” Blackwell said. “I think everybody is enjoying it. Everybody has input, so they’ll watch something they will enjoy. It’s an open forum, and they all get along.”

According to Blackwell, the goal for residents is to be independent as possible.

“We have 41 residents and our service coordinator, Bob Hatten, lives on the premises. He supports them in any kind of way possible so they can live independently as possible,” Blackwell said. “Our goal is for them to age in place.”

Residents also enjoy bingo at 2 p.m. on Wednesdays and a Friday morning Coffee Club starting at 9.

“We watch westerns and musicals and have a King Kong movie coming up,” Williams said. “We also have computer classes and smoking cessation classes in here.”

Kemp said residents are thankful for the new television.

“The new television is definitely better than the old one,” Kemp said. “This gives us an opportunity to socialize with each other. We like it. We’ve got it pretty good.”