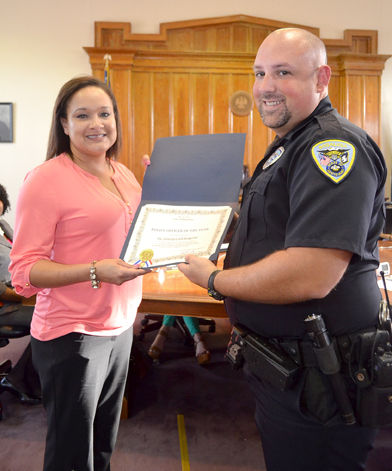 Bergeron, 31, has been with the department for eight years and is a member of the Drug Task Force. Bergeron has served in the military, including two tours in Iraq. Chief Joe Culpepper selected Bergeron for the honor.

“Jeff was selected for the honor for his willingness to go above and beyond the call of duty,” Culpepper said. “He’s always willing to work, and he’s real dedicated. It’s a privilege to have him on the force.”

Bergeron said he received the award in part because of his supporting cast.

”It’s a great honor to be selected for this award,” Bergeron said. “I was kind of set up for this award because of the leadership I have and the people I have working with me.”

“He’s done a wonderful job. He’s dedicated to our city,” Perrette said. “We’re glad to see him come back and get involved in the city in a positive way to combat crime.”

In the public participation segment, long-time City Council watcher Fate Ferrell asked Culpepper what happened to the bicycles and scooters the city received several years ago for patrol use.

Culpepper said the equipment was sold in 2008 at auction.

Perrette said the city had been paying $18,000 per year in insurance since 2008 on the equipment. She said insurance payments stopped three months ago when she learned of the problem.

Concerning other items on the agenda, the council accepted a resolution to approve applications for federal funds from the National Park Service Historic Preservation Grants through the State Division of Historic Preservation, Office of Cultural Development. The grants are to preserve and repair the family home of Civil Rights leader Robert “Bob” Hicks, located at 924 E. Robert “Bob” Hicks Street. The home is on the National Register of Historic Places. The Hicks family wants to turn the home into a Civil Rights Museum.

“To preserve and repair the home, we have to have a 50-50 match. We have to raise funds because the home needs complete rewiring and plumbing and roofing. And it needs to have a handicap accessible ramp.” Hicks Foundation Executive Director Barbara Hicks-Collins said.

A resolution in support of an application for the State Local Road Safety Program to improve infrastructure for safety issues was passed. The grant includes stop signs and caution lights. The Department of Transportation Development pays 100 percent.

Perrette issued a reminder that the city’s Comprehensive Resiliency Plan public meeting is April 18 at the Northside Parent Resource Center. The meeting for the Richardsontown neighborhood in District C is at 10 a.m. The Poplas neighborhood meeting for District A is at 2 p.m.

District A Councilwoman Gloria Kates said there will be an earlier meeting regarding the Comprehensive Resiliency Plan at 11 a.m. on Saturday at Ebenezer Baptist Church concerning the Poplas neighborhood. The Comprehensive Resiliency Plan regarding Richardsontown will also be discussed on Saturday at 3 p.m. at Second Baptist Church on North Avenue.

Two ordinances were introduced. They will be discussed and voted on at the April 21 meeting.

The first ordinance is to change from A-3 Residential to B-1 Business the property located at 820 Robert “Bob” Hicks St. to open a snoball stand at the address.

The City Council will consider adoption of an ordinance setting ad valorem taxes and levying such taxes for 2015. A public meeting is scheduled for May 19 for the public to speak on the matter.