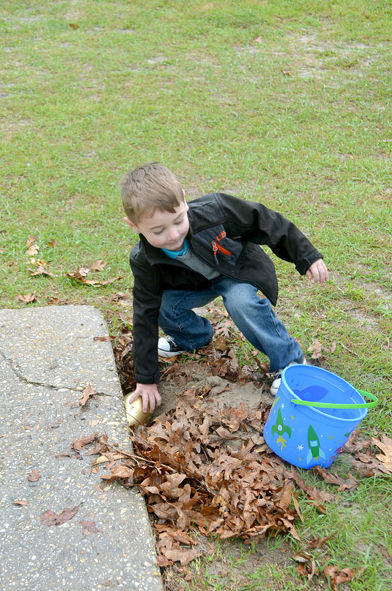 The steady rain could not deter the youngsters’ enthusiasm for the occasion.

“It was absolutely a success,” Tims said. “This was the most participation we’ve had, and this was in the rain. I would hate to see it on a sunshiny day.”

Children scattered at the 10 a.m. start to find the 4,000 eggs. It took but 45 minutes for all the eggs to be discovered, including the two golden eggs. Cousins Luke Crosby, 3, and Christy Crosby, 9, won bicycles as their reward for finding the golden eggs.

Just before everybody departed, the rain stopped and the sun broke through.

“You had a lot of kids who had fun and then they headed out,” Tims said. “The sun comes out right when it’s over. That’s amazing.”

The Easter Bunny also made an appearance during the event.

“I just love watching the kids run like maniacs having a great time,” Tims said.

Tims said he wanted to thank the staff of Our Lady of the Angels Hospital and La Petite La Riche for their assistance in putting on the event.

The day before the city-sponsored event, the District A Easter Egg Hunt was held at the William Bailey Jr. Playground near the corner of Austin and Derbigney streets.

According to District A City Councilwoman Gloria Kates, the event was a big success. The event was for children up to 12 years of age, and children scurried to find the colorful eggs, especially those stuffed with prizes.

The Easter Bunny also made an appearance at the District A event.