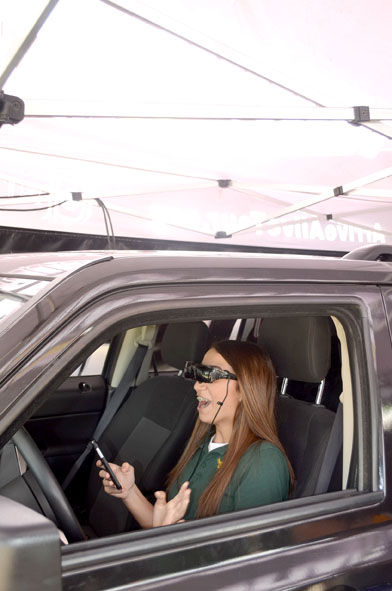 That was pretty much how Bowling Green students fared during Monday’s UNITE’s Arrive Alive Tour.

The tour used a high-tech simulator, impact video and other resources in an attempt to educate the driving public about the dangers of texting and driving and drunk driving.

“I did pretty good. All I did was swerve and was charged with vehicular manslaughter because I hit somebody crossing the road,” Bowling Green freshman Jonathan Smith said.

“I thought I did all right,” Brady said. “I only hit a taxi and was charged with failing to stop, causing a collision and swerving. I thought I was going to do better than hit that taxi. I definitely won’t be texting behind the wheel.”

“I think a lot of them are surprised at how terribly they do in the simulator,” Lopez said. “They think they are invincible. They see their friends go in there and crash. They don’t think the same thing is going to happen to them. Their lack of experience affects them.”

UNITE’s Chris Emmorey explained the idea behind the program.

“We’re teaching them the dangers of texting while driving and drinking and driving in a safe environment so they don’t make the same mistakes in the future,” Emmorey said. “Everyone has a phone with information at their finger tips. I feel like by giving them hands-on experience in a real car they can have a positive experience. They will know how to make the better choice the next time a situation arises.”

Students had the option to text and drive or drink and drive.

“Once you get used to the road in the simulator, we have you text on your phone,” Emmorey said. “In the simulator we put things in your way to see how you react to whatever simulator you chose. The drinking and driving simulator determined how delayed your reaction time is and how off your hand-eye coordination is.”

Lopez and Emmorey wrote out citations after each participant.

“Every one of the students have crashed in the simulator,” Magruder said. “This is much more realistic because they’re actually pushing a gas pedal.”

As a driving instructor, Magruder said the dangers of the road are very much real.

“I can tell you from experience how dangerous it is out there,” he said. “We had a lady drift over the center line on us texting as my 16-year-old was driving. My driver was scared to death. Finally, she looked up and moved back into her lane. We were on the edge of the road. We were scared to death.”

Bowling Green sophomore Cameron Cowart also learned the hard way during the one and only time he said he actually texted and drove.

“I started going off to the side of the road a little bit, so I put my phone down,” Cowart said.