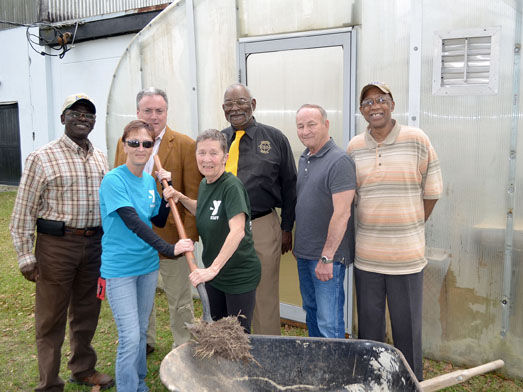 The Washington Men’s Club recently volunteered its time to assist the YMCA in the project.

“The goal of the Growing Green Project is to teach children the benefit of growing their own food,” YMCA Director Toni St. Philip said Tuesday. “We know that one out of every three children in the United States is obese. By growing this food, we’re hoping to change their eating habits to more healthy vegetables and fruits.”

“The Growing Green Project is to help make the Y a more attractive place for activities for children and adults in the Bogalusa area,” YMCA Board member Bill Arata said. “This is the utilization of the Y’s premises in support of the beautification and preservation of the city of Bogalusa’s flora and fauna.”

“The Washington Men’s Club is in support of these efforts in anything that nurtures, serves and educates our youth in the parish,” Buckley said.

“All of these factors will influence greater participation by citizens with hands-on opportunities in a gardening process for wholesome, nutritious grown vegetables,” Harrison said.

The YMCA’s Growing Green Project has been in the works for two years. The YMCA’s greenhouse was donated by Bogalusa Junior High School.

“Through the efforts of Arata Law Firm, were able to obtain funds for project from a private donor,” St. Philip said.