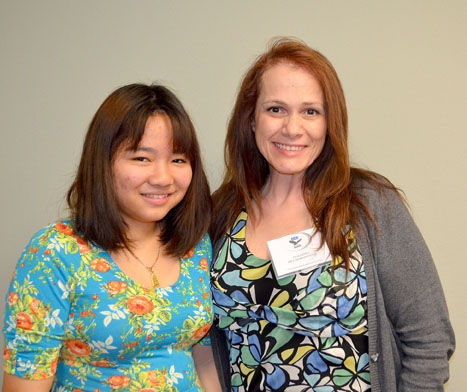 As a foreign exchange student from Krabi, Thailand, 17-year-old Kanchanok Aengchuan might not have the ability to readily articulate her thoughts from Thai to English.

But she gets her point across in answering a question with her ever-present smile and dancing eyes. Her passion for living and studying in the United States is readily apparent.

Aengchuan arrived in the U.S. in August. She is living with host Julia Duvall in Slidell until May 29. She is attending Slidell High School. Duvall is also the regional International Student Exchange agent representative.

“When I talk, people don’t understand me. Yes, I like living in the United States,” Aengchuan said with a smile and nod of her head. “It’s easy for me to make friends.”

Duvall said she found a less complicated way to communicate with Aengchuan.

“We have so many words that mean the same thing,” Duvall said. “Sometimes you have to find an alternate word.”

Krabi is located on the west coast of southern Thailand at the mouth of the Krabi River. The city had a population of 24,986 during the 2005 census.

“She had never seen snow. That was her biggest desire, so we took her to New York City and spent three days in Manhattan,” Duvall said. “She got to see the snow falling. She saw the World Trade Center and Chinatown. We went to see some Mardi Gras parades. We had a big Christmas.”

Aengchuan said she enjoyed seeing snow for the first time.

“Thailand is hot and doesn’t get cold. I want to have snow in Thailand,” Aengchuan said.

Duvall said many home appliances were also something new to the teen.

“She enjoys learning new things,” Duvall said. “When she came in, she was taken by the dishwasher. Seeing her learn new things was so cute to me.”

Aengchuan said improving her English is a priority.

“I want to learn a lot of English and talk, talk, talk,” Aengchuan said. “I think I want to be a teacher.”

Aengchuan’s father is a policeman. Her mother is an elementary school principal. A younger sister is approved to come to the U.S. as an exchange student next school year.

“I’ve done foster children and adopted children and raised my own. I had my own kids when I was 19, so I’ve been raising kids since I was a kid.”

Duvall is from Russellville, Ark. She said she had a friend there hosting exchange students.

“The exchange student representatives wanted to check your home and make sure the child had a bed to sleep in. They also did a background check. You have to have all the appliances in your kitchen with running water. The kids come in with their own money and health insurance, but you do have to feed them,” Duvall said.