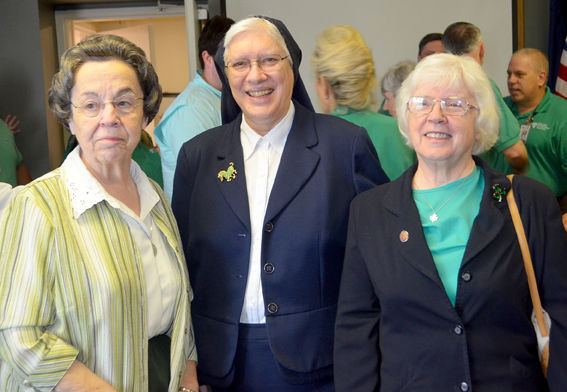 Bogalusa’s Our Lady of the Angels Hospital celebrated its one-year anniversary as an affiliate of the Franciscan Missionaries of Our Lady Health System on Tuesday.

Our Lady of the Angels was previously known as Bogalusa LSU Medical Center, a division of LSU Health Care Services.

The short program took place in the hospital’s board room. Our Lady of the Angels CEO/President Rene Regas welcomed all in attendance.

“This is a great day for us,” said Ragas, who joined the hospital as chief executive officer on May 29, 2014. He added the title of president on Dec. 22, 2014. “I have to thank a lot of groups for being here today. There are the foundation members, board members, team members and guests. The Sisters are here. You know how much we appreciate each and every one of you.”

Ragas welcomed those in attendance and touched on the changeover to Our Lady of the Angels.

“A year ago today we were here on a cold, windy day during the transition,” Ragas said. “Since then, we’ve had 2,000 patients, delivered over 200 babies, have had over 20,000 visits to the Emergency Room and have performed 2,300 surgery cases. This prayer and praise service is to thank God for watching over us a team.”

The Rev. Bob Adams, who retired from First Baptist Church in Bogalusa, read from scripture and offered reflection. Songs of praise followed. Vickie Hickman Spears led the singing, and Randall Garcia accompanied on the guitar. Near the end of the program, those in attendance sang Happy Birthday.

The theme for the 2015 Washington Parish Free Fair is “Making Memories, Making Progress.” The 2015 Fair is scheduled for... read more