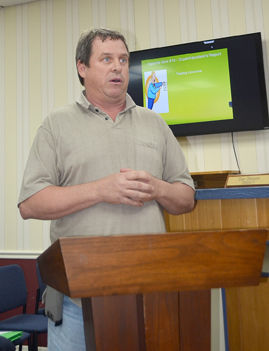 Some parents took Washington Parish School Board members to task Thursday night over what they see as an exorbitant amount of district funds being spent on standardized testing and the revised Pupil Progression Plan.

“Everything about Common Core is a train wreck. All the money we’ve spent on testing should instead be spent on buying computers for the kids,” Kenneth Robbins said. “We’re spending money on everything but the kids. Nobody is asking how much Common Core is costing. Somebody needs to follow the money.”

Franklinton Junior High School teacher Chris Ginn had issues with the Pupil Progression Plan and PARCC, or Partnership for Assessment of Readiness for College and Careers, test.

Board President Matthew Tate said everybody’s concerns or questions would be addressed later by mail.

After the meeting’s public participation segment, Washington Parish Public Schools Superintendent Darrell Fairburn read a lengthy statement in an attempt to explain what the district is doing.

“As far back as January 2010, when the idea of the Common Core State Standards was introduced to the state of Louisiana through the Race to the Top agreement, the majority of the Washington Parish School Board has opposed the hurried implementation of the standards, as well as the lack of scrutinizing the standards for development appropriateness,” he said. “By developmentally appropriateness I mean not only whether are grade and age appropriate, but also that we have not been given the implementation time to start at the kindergarten level and work up one grade at a time. It was in January 2010 for the reasons I have given that the Washington Parish School Board rejected the Race to the Top agreement. However, Gov. Bobby Jindal, State Superintendent of Education John White, BESE, and the Legislature chose to force the public school system in Louisiana to implement Common Core State Standards by charging ahead with plans to test third- through eighth-grade students on the Common Core Standards in both English Language Arts and Math during the 2014-15 school year. The tests chosen for that purpose are referred to as PARCC, or Partnership for Assessment of Readiness for College and Career.

“The Washington Parish School Board has continued to be proactive against the implementation of the Common Core State Standards, and PARCC by passing two resolutions, one on Nov. 7, 2013, and one on Dec. 11, 2014. These resolutions were sent to Gov. Jindal, John White and members of BESE and the Louisiana Legislature.

“Let me remind those of you who read the article in the Daily News on June 23, 2014, in which I was quoted to say, ‘I know you are probably wondering about the future direction of the Washington Parish curriculum in light of the controversy between the governor and the state superintendent concerning Common Core and PARCC. Let me assure you Washington Parish will stay the course with rigor.’

“That is the direction we have pursued with rolling out rigorous standards for our students. In no way has the district advocated ‘PARCC-like testing.’ However, at the same time it would have been shortsighted on our part as educators to ignore the fact that our students will be tested in this manner. Our educators, who have worked diligently to prepare our students for more rigorous standards, and will be held accountable by the evaluation system, and our schools and our district will be held accountable in a punitive manner if our students aren’t prepared. So we have stayed the course with rigor.

“Some sentiment has been expressed that the Washington Parish School District should protest and opt the whole district out of PARCC. That is not feasible, because such a move could cause the system to lose over $6 million in federal funds, including Title IDEA, and School Food Services. That would be devastating to the school and district budgets.

“My request to you as parents is two-fold. One, believe me when I tell you that the opt-out suggestion was introduced by those in corporate America who see the opportunity to attack public education so that they can take over, promote charter schools and receive a lucrative amount of our tax dollars. If a large number of students opt out, schools and districts drop in accountability scores and appear to be failing because students who would likely score well are opting out and causing schools and districts to receive a ‘0.’ Then large corporations and those politically and financially motivated can say, ‘See, public education is a failure. Washington Parish is a failure.’ We are asking that you trust our educators who have prepared our students to the best of their abilities and give your child the opportunity to show us what has been taught well, and where we need to improve. The Washington Parish School System has no intention of bullying students or parents by asking you to help us know where to improve. After all, the tests are not high stakes for our students this year, but they are for the schools your children attend and the school district you can be proud of.

“Washington Parish is the only parish in the state with our rural demographics that has a ‘B’ District Performance Score. All other school systems with similar demographics are below that. But with your support, we plan to maintain that distinction.”

In other matters, the School Board recognized parish winners of the Louisiana School Board Association Artwork Contest. Students competed in three age categories: K-5, 6-8 and 9-12. Parish winners included Jaylon Elzey, Joley Lavigne and Alyssa Vargas. The works of art were recently displayed at the 2015 LSBA Convention at the Shreveport Convention Center.

Also, the School Board accepted e-rate bids from Global Date Systems to upgrade fiber optic cable. The total amount for eight items is $6,705.60.