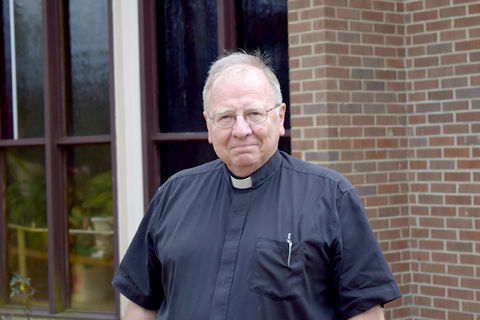 For 16 years Zion Lutheran Church located at 135 Rio Grande in Bogalusa has been privileged to have the Rev. Robert H. “Bob” Belknap, J.D., leading its congregation. Belknap and his wife of 50 years, Agnes, are proud parents of two children and five grandchildren.

Upon retirement from the military, Belknap was a practicing attorney. As he became more involved in church life by teaching an adult Bible study at his church in New Orleans, he felt the Spirit call him to change vocations. He had his mom to care for, a daughter in college and his schoolteacher wife to think of. Belknap said he wasn’t quite sure how completing his education for the ministry would fit into his life.

Belknap’s desire to serve as a minister was strong, however, and he knew that God would make a way for him. The opportunity arose for Belknap to inter the DELTO program. Distant Education Leading to Ordination gave him the chance to come on board at Zion while continuing his education through nontraditional means. At the beginning and ending of classes, Belknap traveled to St. Louis for course work, but the bulk of his studies was accomplished through correspondence. This allowed him to meet the needs of his congregation and complete his studies for ordination simultaneously.

Belknap was ordained on Jan. 12, 2005, upon conclusion of his studies. He had served as worship leader at Zion from May 1998 until his 2005 ordination.

According to Belknap, “All a person needs is to respond to Christ’s tender touch.”

Meeting the physical, emotional and spiritual needs of people has always been a priority of Belknap’s ministry. Whether achieved by opening the church fellowship hall to feed power company workers after Katrina, visiting the elderly in his congregation, or lending an ear to a dear old soul in the nursing home, Belknap’s efforts have focused on one common purpose — to share the love of Jesus Christ.

Belknap will be entering a new phase of his life as he and his wife prepare to move to New Orleans at the end of April. His successor will be Vicar Anthony Thomas of Lacombe.

The many wonderful memories of the people of Bogalusa and his time of service at Zion Lutheran Church make this move bittersweet for the Belknaps, but they are trusting God as they follow Him to life’s new adventures ahead.

Sunday morning services at Zion are held at 10:30 a.m. Weekday study is held each Wednesday evening at 6:30 p.m., with the exception of Advent and Lent.