Motorists paying more at the pump 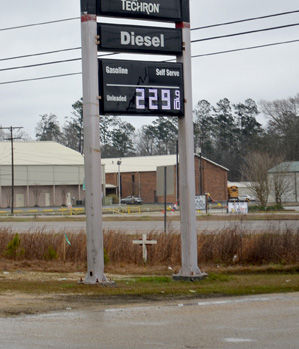 After a bit of a reprieve over the last two months from high fuel prices, Washington Parish residents are beginning to see retail prices at the pump creep higher and higher.

Approximately three weeks ago, retail price for a gallon of regular at Nore Stop N Shop on Georgia Avenue sold for $1.89 for the lowest in Bogalusa. On Friday, regular fuel at Nore sold for $2.25.

At Exxon Tiger Den at 15019 Louisiana Highway 21 South sold for $2.27 per gallon on Thursday. Regular plus was $2.47 per gallon, while super was $2.67. Diesel was $2.69. Regular fuel sold the previous week for $2.24. Three weeks ago, a gallon of regular was $2.19, according to station manager Andy Nguyen. Retif Oil out of New Orleans supplies the station.

“Retif Oil delivers my gas and tells me if I need to go up or down in gas prices,” Nguyen said. “They’re my boss.”

“Prices are jumping up almost every day,” Texaco manager Majid Randhawa said. “It’s my belief the refinery strike is the biggest reason prices are rising.”

The cheapest fuel prices in Franklinton on Friday were found on Washington Street. Valero and Market Max were selling a gallon of regular for $2.27.

GasBuddy.com Southeast Senior Petroleum Analyst Gregg Leskowski said a variety of factors are the cause behind high fuel prices.

“One of the main reasons you’re prices going up is the refineries are moving into a maintenance period at this time every year,” Leskowski told the Daily News. “Refinery output is diminishing. You’re seeing buildups in crude oil inventory, but not in gasoline inventory. A number of refineries are running into this problem with transition.”

Leskowski said the United Steel Workers strike has a major impact on fuel prices. The strike includes the largest refinery in the country in Port Arthur, Texas. A number of Louisiana refineries are also on strike.

“All of these things happening at the same time have pushed up wholesale gasoline prices,” Leskowski said. “If there is a silver lining in all of this is you’re still paying $1 less per gallon than you were a year ago.”