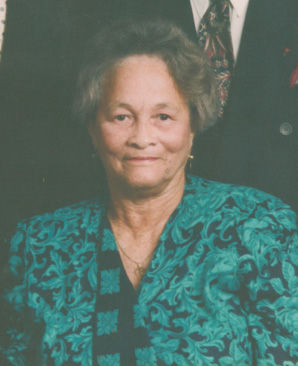 Mary Josephine Williams “Momma Joe” was born on June 3, 1925, to the late William and Inez A. Crain in Franklinton. She was the eighth child of 13 children. “Momma Joe” was called home the morning of March 2, 2015. She began her Christian journey at an early age and was a member of Sweet Home Church of Christ Holiness, USA. She attended Washington Parish Training School and upon graduation, attended Southern University in Baton Rouge.

She was united in holy matrimony to the late Fred Magee, and to this union one son was born, Frederick Magee. Momma Joe later moved to New Orleans and became a faithful member of Bethlehem Baptist Church. She began her career at Tulane Sewing factory, at which time she met and married the late Charles A. Williams, and to this union three sons were born, Charles, Larry and Gilbert Williams. Momma Joe retired as a supervisor at the City of New Orleans Parks and Recreation Department.

After retiring in 1990, Momma Joe started on a new journey filled with family, travel and lots of laughter. She was dedicated to her brothers and sisters and was always there to help family and friends unconditionally.

She later moved to Houston and became an active and faithful member of Mt. Horem Baptist Church. In 2009, she returned to Louisiana and was a beloved resident of Resthaven Living Center in Bogalusa, where she was chosen as the first black Mardi Gras Queen of the Center. Momma Joe was also an avid sports fan who held season tickets to her beloved New Orleans Saints for more than 30 years. Her laughter and love of life was contagious. She was a true blessing to all who knew her, and she will be missed.

She leaves to cherish her memory, three sons, Frederick (Willoya) Magee of Bogalusa and Larry (Joyce) Williams and Gilbert Williams, both of Houston; one sister, Mattie Crain Sherard of Columbia, S.C.; one brother, Brisco Crain of Franklinton; special friends, Waver and Richard Keil of Franklinton; nine grandchildren; 16 great grandchildren; three great-great-grandchildren; and a host of nieces, nephews, relatives and friends who loved her.