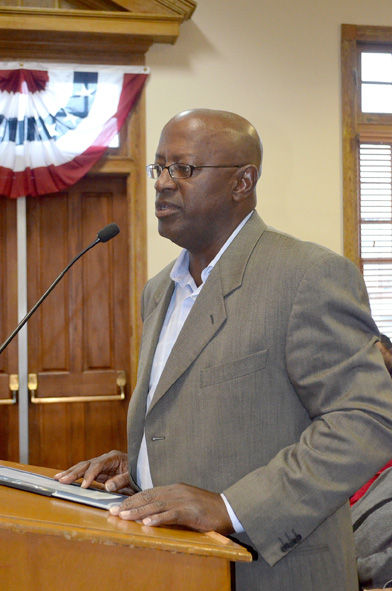 Tuesday’s Bogalusa City Council regular meeting was expected to be prolonged and fiery as the public was originally scheduled to have their opportunity to discuss the controversial Comprehensive Resiliency Plan.

Bogalusa city leaders met with city planner and Comprehensive Resiliency Plan author Dana Brown of Dana Brown & Associates on Monday at City Hall and seemed to work out some major differences and agreed to start the process over where the Poplas Quarters and Richardsontown neighborhoods are concerned.

“Someone said ‘Let us reason together.’ That was what we did yesterday,” Theresa Keller said Tuesday about Monday’s meeting. “Dana Brown reasoned with us. We‘re looking forward to getting together with her to work together with the city of Bogalusa.”

Keller said she did have a concern with the Comprehensive Resiliency Plan.

“I’m here tonight to find out if the council has confirmed decisions made Monday by Dana Brown? For those of you who weren’t at Monday’s meeting, the Poplas and Richardsontown sections of the plan are going to be deleted and rewritten. We reasoned together,” Keller said to a round of applause.

“Everybody on this council is 100 percent behind what happened yesterday,” Councilman Doug Ritchie said to another round of scattered applause. “There was never a plan to exclude anybody.”

Bogalusa resident Fate Ferrell is a familiar face at City Council meetings. He commended the city and city officials for bringing Brown in to explain details about the plan.

“I want to thank the council and Mayor Wendy Perrette for bringing this program to us,” Ferrell said. “I’m proud of you all. I’m proud of you citizens for coming tonight. Like church, maybe you should make it a regular thing to come to these meetings. And get your neighbor to clean up their property and get these drugs off the street. If you want things to happen, you’ve got to wake up and make it happen.”

Members of Sweet Beulah Baptist Church, located at 1408 N. Roosevelt St. in Bogalusa spoke before the City Council again and requested again that Roosevelt Street be paved in front of the church.

“I’m asking the council if they could get into an intergovernmental agreement with parish government and fix the road in front of the church?” church member and Parish Council member Andre Johnson said. “I understand budgetary concerns. If you all provide the materials, we could do the work.”

Perrette said the project isn’t on the immediate agenda.

“We do have a good working relationship with the parish,” Perrette said. “We would have to pay for the overlay and the manpower. We’re working on operating funds for next year.”

The council approved a resolution in support of Bryan Stewart as city consultants for grants, business interests and legislative matters of the city.

Byron Stewart and Associates is a 17-year-old consulting firm that specializes in governmental affairs and business development, strategic planning and legislative affairs.

The City Council introduced a resolution concerning a special election to be held on Saturday, Oct. 24, 2015, seeking approval for the city to authorize the tax renewal of 2.75 mills for the purpose of paying the costs of providing retirement and pension benefits for the city’s retirement system.

Four ordinances were also introduced. They will be up for public discussion before being voted on at the next meeting on March 17. They included:

• An ordinance to repeal and replace Ordinance 2170, operating a vehicle while intoxicated.

• An ordinance to repeal and replace Ordinance 2171, underage operating a vehicle while intoxicated.

• An ordinance amending the Municipal Criminal Code of the city regarding theft and providing a penalty for violations.

Duke said the proposed ordinance increases misdemeanor theft from $500 to $750.

• An ordinance authorizing a Professional Service Agreement for a historical survey between the city and Cypress Building Conservation. The ordinance calls for another phase of identifying various historical landmarks in the city.

Bogalusa Recreation Director Landon Tims said Cassidy Park is the site for the annual cook-off and barbecue on March 21, the Gospel Music Fest on March 28 and the annual Easter Egg Hunt on April 4

Downtown Main Street Director Robin Day said the first Rendezvous on the Road of the season is scheduled for 6 p.m. on March 27. The series is set for every fourth Friday of the month.