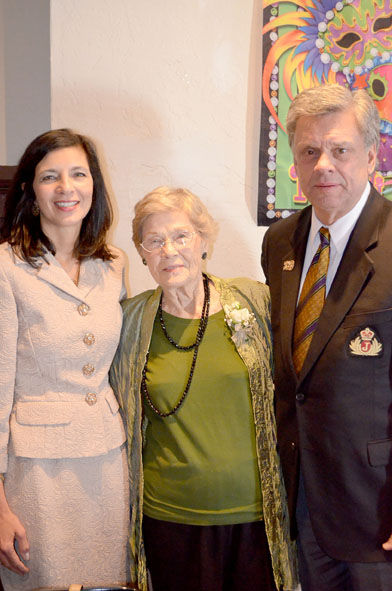 The Magic City Carnival Association’s 2015 XXXV King and Queen presided over the most recent Civic League meeting at Maria’s Restaurant.

Both MCCA King Richard Jenkins and Queen Deni Talley Black told Civic League members a little about themselves and their ties to MCC.A, which rolls through Bogalusa on Feb. 14.

Jenkins is president of Moore and Jenkins Insurance Agency, which has offices in Bogalusa and Franklinton.

“It’s an honor and privilege to be king. When I look back at the list of previous kings, I ask myself how did I get on that list?” Jenkins said.

“This organization has taken a lot of turns,” Jenkins said. “In 1981, Jack Wempe and Don Spiers got together thinking of ways to improve Columbia Street. They came up with Mardi Gras. This was in January when they came up with the idea, and 45 days later the parade rolled. The floats were quite unique.”

Jenkins said although MCCA is a men’s organization, the women became involved through M.A.S.H. and G.G.’s Gravel Girls, the wives of Roogaroos.

“MCCA is all grown out of that,” Jenkins said. “We have 10 or 12 ladies groups today. I’ve tried to do things the right way. This is the first and last time I’m going to be king. It’s just been unbelievable warmth and a good feeling we have when we walk into a room.”

Jenkins is a native of Washington Parish and is a Franklinton High School and Southeastern Louisiana University graduate.

He said Bogalusa residents must work together to improve the city.

“I feel it’s time to step up to the plate to do things right,” Jenkins said. “It takes a whole community to improve the city. This has been a blessing to me.”

Black, this year’s queen, was born and raised in Bogalusa. She is a graduate of Bogalusa High School and Louisiana State University, where she was a member of Chi Omega sorority. She is married to Alan McGrath Black. She currently teaches fifth grade at Little Oak Middle School in Slidell.

Black said many family members have been involved with MCCA at one time or another. Her husband served as King MCCA XX. Her father-in-law, Joe Black, served as MCCA King III, and Vickie Black Evans served as Queen MCCA X. Black’s four sons have served as royal guards and pages. The youngest, Patrick, is currently a royal guard to King MCCA XXXV.

Black said she watched MCCA roll the first time in 1981 on Carolina Avenue.

“Thirty-five years later, I’m riding in it,” Black said. “ So much hard work formed MCCA. It brings all people together. There are a lot of special people in Bogalusa. Everybody uses their talent to make the parade successful. It’s fun for the participants and the public.”

The theme for the 2015 parade is “MCCA Salutes the Classics.”

Jenkins and Black were presented with gifts by the Civic League Vice President Janice Hillaire.

Also at the meeting Civic League charter member Mary Anthony was recognized for her 68 years in the organization.