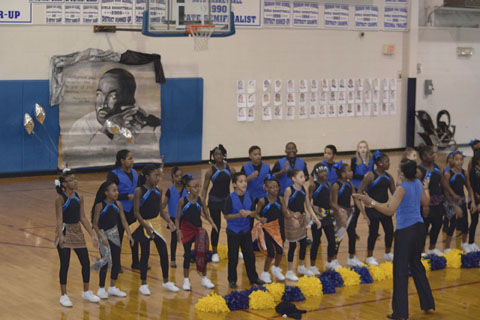 On Saturday, Jan. 17, the annual Dr. Martin Luther King Jr. parade rolled through the streets of Varnado. The pleasant temperatures and blue skies encouraged a good crowd to come out and enjoy the festivities of the day.

Parade goer Selena Magee from Angie said, “This is a very special day for our family, community and church home. I believe that some people in Washington are trying to bring us back to a time of distrust and hate, but Dr. King left a legacy that we should follow. It’s a blessing to be able to come together as one people without seeing color. We are a rainbow. The world we live in today can be a scary place if we don’t focus on the main thing, Jesus. The Bible says to seek Him first and all other things will fall into place. People just need to follow Jesus.”

“It’s wonderful to recognize a man that united America. He was for everyone, including women, and opened a lot of doors,” Joe Lewis shared as he visited with his friends before the parade began.

A large crown converged on Varnado High School, where the hard work of many groups and individuals came together in a beautiful celebration of unity. The life and legacy of Dr. King resonated through everyone who took the stage.

Parade Chairman Levi Lewis Sr. called the meeting to order, followed by a processional in honor of 2015 King and Queen the Rev. Terrence S. August and Cynthia A. August. Jayla Peters led the Pledge of Allegiance, with the Rev. Nolan Robinson praying for God’s blessings on the day and the country.

The Varnado Elementary show choir wowed the crowd with several numbers. They sang and danced their way into the hearts of those in attendance. This performance was followed by numerous others, all proclaiming King’s positive message of love and unity.

Levi Lewis Sr. said he revels in the knowledge that what began 15 years ago has stayed alive and grown into the special event that young and old in the community participate in today.

According to Lewis, “Brother Freddie Jefferson founded a reunion of Wesley Ray graduates. During one of those reunions we decided to have an annual MLK parade. The Concerned Citizen’s organization took up the call and implemented the parade and program. We started small, and it grew.”

Kelvin May, attorney at law, and his son, Jamison Hamilton May, came out for the festivities.

“I’m sure he doesn’t understand exactly what we are celebrating, but it makes me proud to be able to share in this time with him. I appreciate all that Dr. King and leaders of the other races fought to give us. We enjoy the privileges we have today because of their sacrifices,” he said.

Seventeen-year-old Ernest Reed summed up the feelings of many in attendance when he said, “Basically, the color of your skin doesn’t matter. Your character is what matters.”