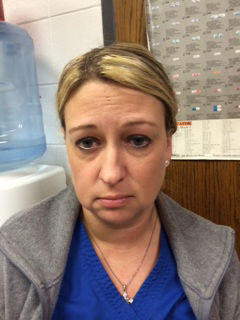 A former Franklinton High School employee was arrested this week after the Washington Parish Sheriff’s Office received information that she had engaged in sexual activity with juveniles.

An investigation was launched that culminated Wednesday afternoon with the arrest of Kimberly Shaw Cooke, 40, a resident of Bickham Street in Franklinton.

“We had a citizen reveal the information to us,” Chief Deputy Mike Haley said. “We took the information from the citizen and that led to an investigation. We learned that it did happen.”

Officials at Franklinton High School cooperated with the investigation. There is no evidence to indicate that Cooke engaged in sexual activity with students while she was employed at the school.

According to information obtained during the investigation, including interviews and written statements, Cooke had sexual relations inside her home with at least two Franklinton High School students, both under the age of 17.

Cooke was arrested Wednesday afternoon and transported to the Washington Parish Jail and charged with two counts of indecent behavior with juveniles under the Louisiana Revised Code. The Code defines such behavior as “any lewd or lascivious act upon the person or in the presence of any child under the age of 17, when there is an age difference of greater than two years between the two persons.”

Her bond was set at $40,000. She bonded out Wednesday night and was released.

District Superintendent Darrell Fairburn said Thursday he had no knowledge Cooke engaged in sexual activity while employed with the district.

“As far as I know, she didn’t engage in that type of behavior with students while she was employed,” Fairburn said. “I don’t know her that well. We absolutely don’t condone that behavior.”

Haley left open the possibility more charges could be added.

“There may be more charges,” Haley said. “The investigation is ongoing and we have no idea where it might lead.”

“It is shocking and disappointing to hear news like this,” Seal said. “There is no excuse for such exploitation of juveniles. I commend our staff for acting quickly and making this arrest.”

Cooke is reportedly married but is in the process of divorcing.