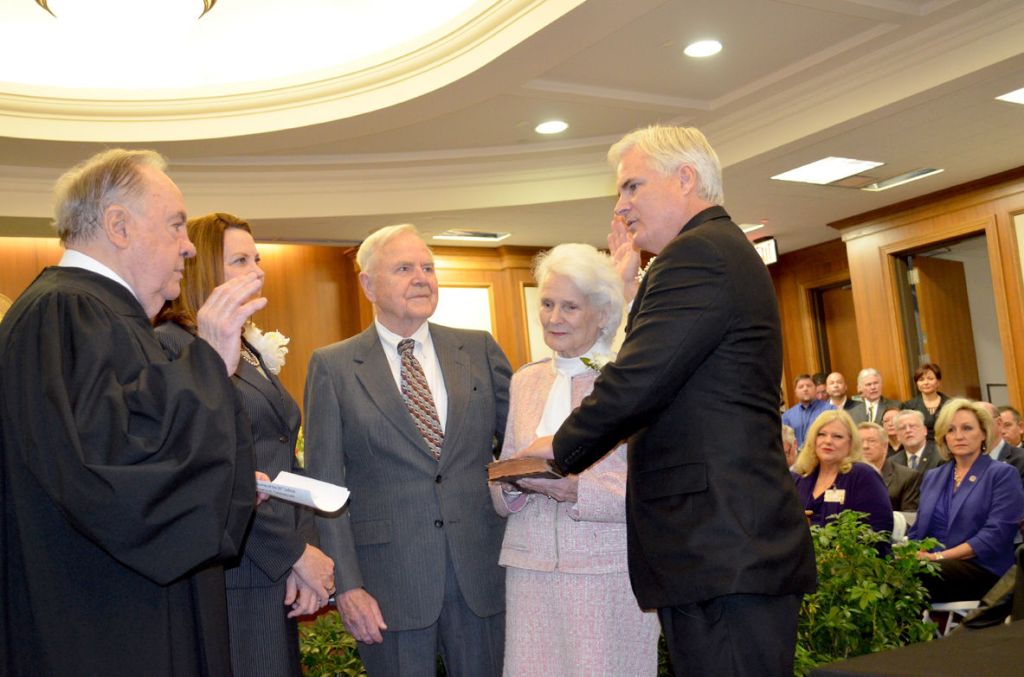 As the new district attorney for St. Tammany and Washington parishes, Warren Montgomery vowed to decide individual cases based on facts rather than connections.

Montgomery took the oath of office on Monday at the St. Tammany Parish Justice Center in his hometown. Retired Louisiana Supreme Court justice, the Hon. Harry T. Lemmon, administered the oath in the Misdemeanor Courtroom, which was not large enough to seat everyone who came to witness the event.

Montgomery beat out four other Republican candidates to win the election. In the Dec. 6 runoff, Montgomery defeated Brian F. Trainor in a hotly contested race.

Montgomery, 59, succeeds longtime DA Walter Reed, who was in office for 30 years. Reed is currently under federal investigation for a handful of charges.

Montgomery was introduced by newly-elected U.S. senator and long time friend, Dr. Bill Cassidy. Montgomery quoted ancient philosopher Aristotle to make his point for the reasons he thought he was elected.

“The people wanted the focus on the justice system, and not politics,” Montgomery said. “We want to run this office by making decisions based on facts and results of hard work and not connections. We also want results. My philosophy is that jail and incarceration are reserved for criminals. The Criminal Justice System wants to help the offender get back on track. We’re in this together.”

Montgomery said citizens should look to the future.

“I look around and see all the people from Bogalusa. I want to thank the people of Bogalusa for coming. Bogalusa has been through some rough times over the last 25-30 years. With faith in God and determination, there’s no question Bogalusa is going to turn the corner.”

Montgomery repeated his theme that the area’s problems are concerns for everybody.

“We’re all in this together, whether you’re north or south, white or black, rich or poor or Jew or gentile. The role of the district attorney is to bring good will and healing and do that through law and government,” Montgomery said. “I would ask the Ultimate Law Giver if He will bless us in this noble endeavor.”

Cassidy defeated three-term incumbent in Louisiana Democrat Mary Landrieu for the Senate seat. He said he met Montgomery for the first time while the two were at LSU.

“I’m often asked by young people how to get into politics,” Cassidy said. “I tell them what you want first is that life experience that trains you for politics. Warren Montgomery has that variety of human experience that will form his work as the district attorney. He is girded in principle. His faith forms his perspective.”

Cassidy lauded the region’s leaders and then left the proceedings to catch a plane back to Washington, D.C.

“The northshore is providing Louisiana with great leaders,” Cassidy said. “Not only do they administer justice fairly, but they make sure the north shore is an area the rest of the state can look to.”