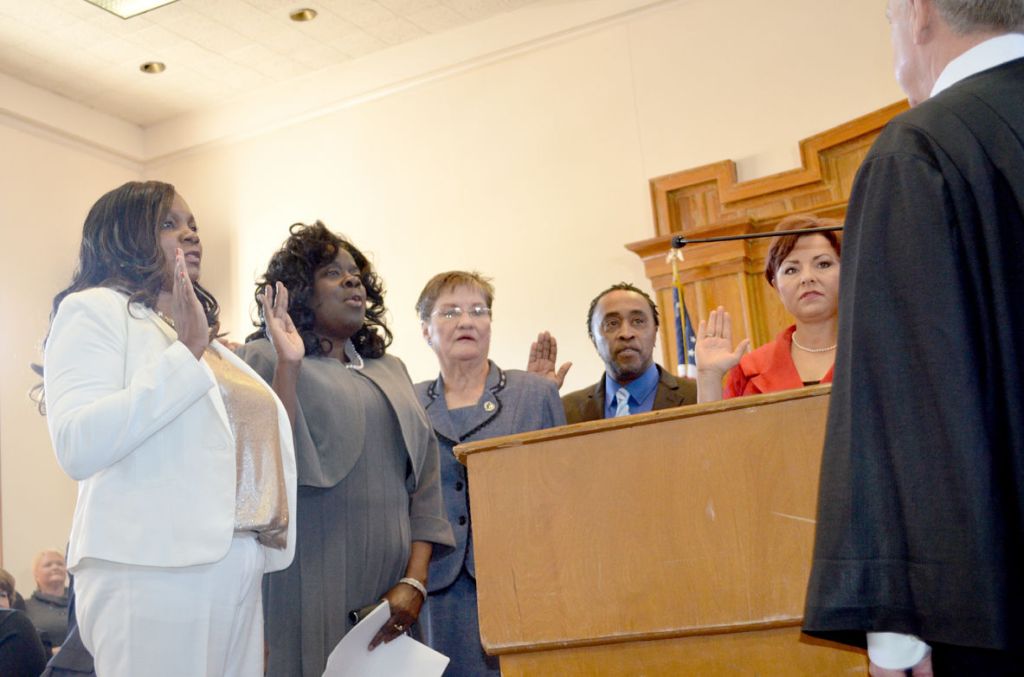 As mayor, Wendy Perrette vowed to tackle the ills that have plagued the city, such as poor roads and public safety. She said it will take all the city working together to accomplish those goals.

Judge Robert J. Black swore in Perrette as her son, Rex, beamed beside her. Black also swore in the seven-member City Council and other elected officials. Black himself was administered the oath of office by Judge William J. Burris.

“She taught me that you can do all the right things in the world, but you do one wrong thing and you will be remembered for it,” Perrette said, adding, “I know Alan is here in spirit.”

Perrette then got down to business.

“Each of you are here because you care about our city,” Perrette said. “Roads and public safety are two most talked about complaints I hear. These two things seem to cast a negative image on our city. I will do all I can to improve this city. City government has to work together, and we must be solution focused. We appreciate all those departments who serve the city, like police and fire departments. We will work hard to serve this city.”

“Mother Teresa said ‘You can do what I cannot do. I can do what you cannot do. Together we can do great things.’ It will take all of us to take this city forward,” Perrette said. “I look forward to our journey ahead.”

Mother Teresa was a Roman Catholic missionary who devoted her life to working with the poor and starving of India.

Perrette then recited Philippians 4:13: “I can do things through Christ who strengthens me.”

“I’m honored and humbled. I will work with everyone in this city. We need your continued prayers,” Ritchie said.

“I’m willing to work diligently for my community,” Moss-Smith said. “I thank everyone who played a part in my campaign.”

Kates brought up some issues that are dear to her during her speech and introduced much of her family.

“I’m appreciative of the support from the community of Bogalusa and District A,” Kates said. “I will continue to stand firm in the community and the promises I have made to you. Thank you for allowing me to be a decision-maker. I’ve been involved with neighborhood programs, and I will bring that up during meetings.”

“I thank God and my family,” McCree said. “I thank the people of District C for believing in me. I want to let the people in Public Works and all the office workers know that you have a friend in Brian McCree.”

White said suggestions from citizens will always be welcomed. She also paraphrased the words of John F. Kennedy regarding service.

“It’s a diverse City Council, and I’m proud and honored to be a part of that,” White said. “I ask for your input. Bring us not only issues, but solutions. I feel any decision we make will be for the better of Bogalusa.”

As the mother of eight children and seven grandchildren, Fortenberry introduced those who attended as well as friends and supporters.

“As you can tell, I love my family,” Fortenberry said. “It’s an honor to represent District E. I want to make this community a cleaner and safer place to live.”

Bogalusa celebrated its Centennial over the summer. Duke mentioned that in his remarks.

“If we all work together, Bogalusa’s second century will be as magical as her first,” Duke said.

“I thank everyone for being here,” Sumrall said. “It’s the dawn of a new day in Bogalusa. I look forward to working with Wendy Perrette. Let’s go forward from here.”

Black credited his staff for his re-election.

“I’m thankful I qualified again with no opposition,” Black said. “My qualifications are a reflection of my office clerks. I will continue to be fair but always firm. I encourage the public to report crime when they see it.”

“This is a new chapter in our city’s history,” Norwood said in the prayer. “Please grant our new mayor wisdom to lead this city, the courage to make the tough decisions and compassion as she deals with all the people of this city. Give her strength and perseverance as she works to build a more prosperous Bogalusa.”

“Prayer is the greatest tool Christians have,” Palmer said during the prayer.

Montgomery said he will be a friend to Washington Parish.

“I’m going to be here every week working with law enforcement to stop crime and give you the best community we can,” Montgomery said.

Chris Workman served as master of ceremonies during the event. He is associated with Moore and Jenkins Insurance Agency.