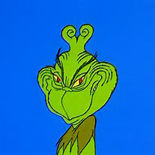 Grinch, 56, a green male who resides on Mount Crumpit near Whoville, had been hiding in Washington Parish, waiting to steal Christmas trees, ornaments, decorations and presents for parish children.

“We received a tip from Cindy Lou of Whoville who told us Grinch was heading to our parish. We set up surveillance and were able to spot his dog, Max, who was traveling on the shoulder of Highway 10 between Bogalusa and Franklinton,” Washington Parish Sheriff Randy Seal said.

“We secretly placed a microphone on his collar and let him go. Thankfully, he went to Grinch, who was hiding in the woods near Highway 62. Grinch tells his dog everything, so we were able to listen in on his plans to ruin Christmas,” the sheriff added.

Once investigators had the evidence, they were able to apprehend Grinch after a short foot chase.

“My hope is that residents of Washington Parish can now relax and have a very Merry Christmas,” Seal said as he booked Grinch into the parish jail.

Then he turned to the Grinch and said, “You’re a mean one, Mr. Grinch. You really are a heel.”

All Washington Parish Government offices will be closed today, Thursday and Friday of this week. The offices will reopen on... read more