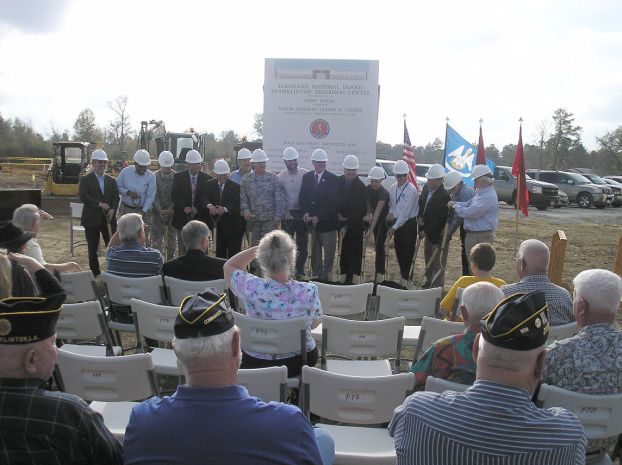 Franklinton Mayor Wayne Fleming said the groundbreaking ceremony on Dec. 4 for the new Louisiana National Guard’s Readiness Center is a shot in the arm to the local economy.

The Readiness Center will serve as headquarters for more than 115 soldiers of the National Guard’s 843rd Horizontal Engineer Co.

The center will be more than 40,400 square feet. Construction is projected to be approximately $12.9 million. The projected completion date is March of 2016.

“The Readiness Center means a lot to the local contractors here,” Fleming said. “There is the big contractor, but they will be subbing out to some of the smaller people. Willis Sand and Gravel in Isabel will be doing the dirt work for example.”

Flooding caused the old National Guard building to be deemed unusable. ‘This means we’ll be able to keep our National Guard in Franklinton. They spend money in town buying food and gasoline. It’s a major facility,” Fleming said. “It would have been bad for the National Guard to have left here.”

The Readiness Center has a 99-year lease with the town.

The groundbreaking ceremony was held at the facility in the new Industrial Park off Louisiana Highway 10.

Fleming said the Guard has always been a valuable partner.

Maj. Gen. Glen H. Curtis was in town for the groundbreaking ceremony.

“We were honored to have Maj. Gen. Curtis in town for the ceremony,” Fleming said. “He helped us get the Readiness Center.”

In his remarks, Curtis spoke of the company’s history.

The 843rd Horizontal Co. originated as Co. B, 205th Engineer Battalion, which was established in 1967. In 2003, the company deployed to Afghanistan with the 205th Engineer battalion, providing construction and engineering support to the 10th Mountain Division in support of Enduring Freedom. The unit completed more than 100 construction missions over the 10 months it spent in the country.

U.S. Attorney Kenneth A. Polite announced that Tenille Nielson, age 34, of Franklinton was sentenced Wednesday for her role in... read more