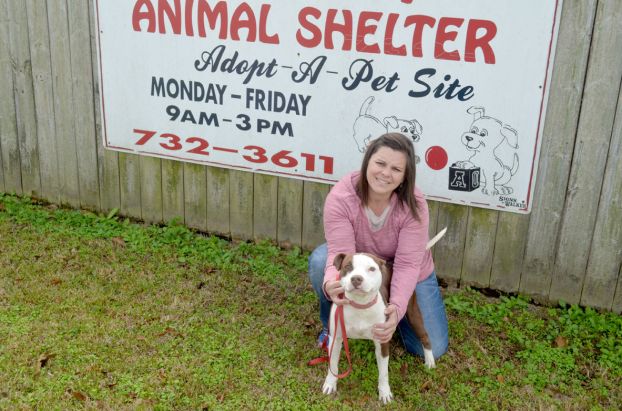 As a volunteer with the Magnolia Chapter of the Humane Society of Louisiana, Dancie Magee said time is not on the side of many animals housed at the Bogalusa Animal Shelter, located behind City Hall.

The shelter has 14 pens for dogs. There is a seven-day hold on stray dogs and no hold for dogs that were surrendered by their owners.

Magee said Animal Control Officer David Kellis often works with her group to save as many of the animals as possible. Still, some dogs still have to be euthanized.

“We’re trying to find these dogs a home or owners who will recognize them,” Magee said. “There are two beautiful female pit bulls in here with collars on them. I don’t know why people don’t want to pick them up. I just don’t know.”

There were nine dogs in the shelter as of Wednesday morning. Kellis often doubles up the smaller dogs to make room.

“Whenever they fill up the pens, they have to make room,” Magee said.

Dogs are kept in a brick building, which is not fully enclosed, so it is extremely hot in the summer and cold in the winter.

“David tried to help us by keeping dogs longer than he should,” Magee said. “The Magnolia Chapter is always looking for foster parents for animals and volunteers. We come in and pull dogs if we have open spaces with fosters. We also network these dogs on Facebook and other sites trying to find fosters or adopters.”

“The bull mastiff came from Varnado and was brought here,” Magee said. “He’s been over the 10-day hold. He’s a big baby. We’ve been trying to network the two pit bulls for about a month now. These two will be euthanized if we don’t get them out of here. They both are in very good shape and are good with people.”

The Magnolia Chapter does offer a low cost spay-neuter clinic twice per month. The fee is $65 for dogs and $35 for cats. Adopting a dog through the City’s Animal Control is $10.

“The only way we can save these dogs is to get them out of here,” Magee said. “This is not the fault of the Animal Control Officer. This is a part of his job. This is a small facility. There are just so many dogs in Bogalusa that it’s unreal.”