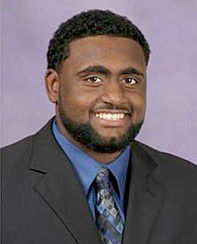 Xavier Jefferson, a former Franklinton High School Demon, Class of 2011, and a member of the 2010 state championship team, has continued his academic success as a Northwestern State University Demon student-athlete in Natchitoches on full scholarship.

On Dec. 19, he will receive his Bachelor of Science in Business Administration with a concentration in finance. He will graduate magna cum laude with a 3.71 GPA. Because of his academic achievement, he has also been inducted into the Phi Kappa Phi National Honor Society. This honor recognizes undergraduates who rank in the top 10 percent of their graduating class. He is also a member of Beta Gamma Sigma International Business Honor Society, which recognizes the most outstanding students that rank in the upper 10 percent of their senior class for business programs at schools accredited by the Association to Advance Collegiate Schools of Business.

Each semester throughout his studies, he remained on the Academic Dean’s List by maintaining a 3.5 or higher GPA and was also awarded the Southland Conference Commissioner’s Academic Honor Roll that recognizes student-athletes who successfully complete the academic year with a GPA of 3.0 or higher. After graduation, Jefferson plans to pursue a career in the business world as a financial professional.