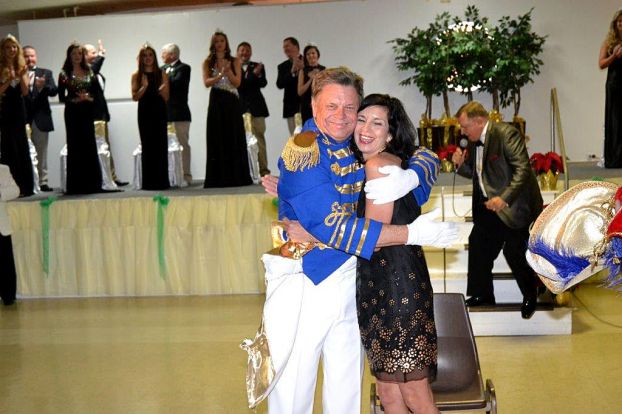 MCCA names king and queen for 2015

Richard Jenkins said the timing was right for him to reign this Carnival season as King of the Krewe of MCCA.

“It’s an honor and a privilege to represent MCCA in its 35 years of existence,” Jenkins said. “MCCA brings a lot of family involvement. This year in particular will be a great time to put our best foot forward to improve the spirit and enthusiasm of our parish.”

Jenkins is president of Moore and Jenkins Insurance Agency with offices in Bogalusa and Franklinton.

Jenkins said he is eager to reign.

“I’m looking forward to it, with all the changes going on in our nation, state, parish and city,” Jenkins said. “MCCA provides us a time to come together with a fresh spirit for our city.”

Jenkins is a native of Washington Parish and is a Franklinton High School and Southeastern Louisiana University graduate. He currently serves as an officer and is a member of the Executive Committee for the Louisiana Independent Insurance Agents Association.

Jenkins is married to Candy Hood Jenkins and lives in the Springhill community. He is the father of two children, Scott Jenkins and Leanne Jenkins Norris. His son is a resident of New Orleans and is married to Helen Schmidt Jenkins. They have three children, Scott Jr., Sara and Gracie. Scott is a partner in the Jones Walker Law Firm. Leanne, who was a MCCA XII maid, is married to Josh Norris, and is also with the Jones Walker Law Firm. They have three children, Marah, Jackson and Madeline, and reside in Houston, Texas.

Jenkins is a member of Centenary United Methodist Church in Franklinton and serves as liturgist and member of the Pastor-Parish Relations Committee. He is past president of the Washington Parish Fair, Franklinton Country Club, Bowling Green School and Franklinton Skeet Club.

According to Jenkins, he was encouraged to join MCCA by an old friend, Cook Bryd.

“I’ve toyed with the idea of being King before, but the timing was never right,” Jenkins said. “I thought the timing had to be right, and this was the perfect time for me.”

Queen Deni Talley Black, born and raised in Bogalusa, is a graduate of Bogalusa High School and Louisiana State University, where she was a member of Chi Omega sorority. She is married to Alan McGrath Black, and they currently reside in Slidell.

Black is a 30-year elementary school teacher and currently teaches fifth grade at Little Oak Middle School in Slidell. She is a member of the Ozone Camellia Club and Le Cotillion. She attends St. Luke the Evangelist Catholic Church.

Black is the daughter of the late Mr. and Mrs. Donald Ray Talley. Her husband, Alan, also a Bogalusa native, is an attorney in private practice in Slidell. They have four sons, Nicholas McGrath, Andrew Talley, Alexander Newell and Patrick Alan, a daughter-in-law, Megan Elizabeth, and two grandchildren, Rowen McGrath, age 3, and Madelyn Elizabeth, age 1.

Black is the sister to Donna Talley and Patti Lyons of Baton Rouge and Tami Cox of Vail, Colo.

Black’s sons have all served as pages and royal guards in past MCCA courts. Her son Patrick is currently a royal guard to King MCCA XXXV. Alan Black is in the MCCA Den of Wahoo and Deni Black is a member of the Ladies of MASH.

Other past MCCA royalty in the Black family, other than her husband, King MCCA XX, include King MCCA III Joe Black, Queen MCCA X Vicki Black Evans and numerous nieces and nephews.

The 2015 parade theme is “MCCA Salutes the Classics.” Floats and costumes will depict many well-known classics, including “Gone With the Wind,” “Last of the Mohicans,” “Lonesome Dove” “Huckleberry Finn, and others.

After 39 years in education, including the last four years as principal at Varnado High School, Randy Branch is calling... read more