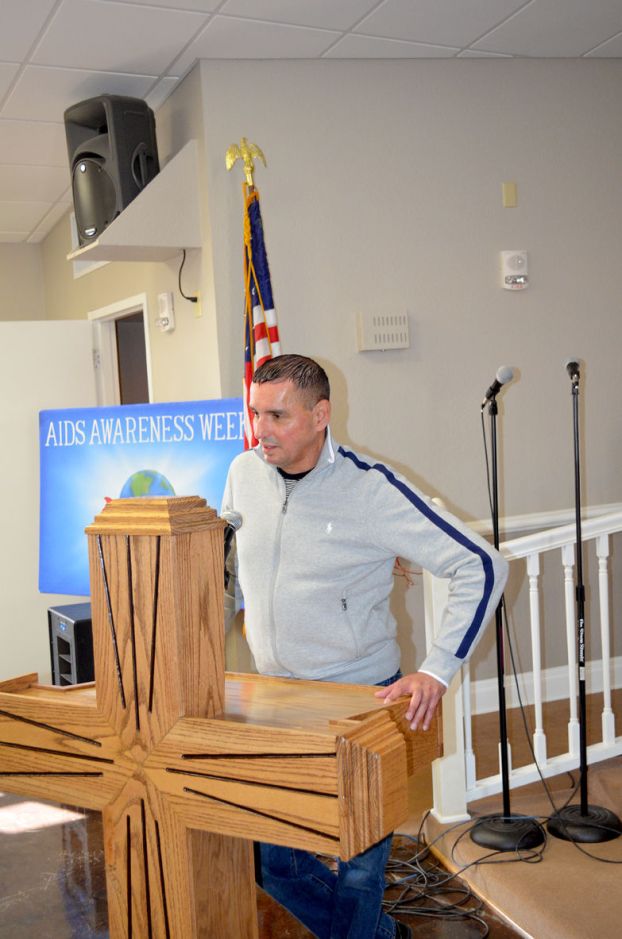 Rayburn inmates get lesson on HIV and AIDS

As a person living with HIV, Major Smith said the illness is not a death sentence as it once was.

Smith was one of the principal speakers Wednesday during Rayburn Correctional Center’s AIDS Awareness Week. Smith is the principal coordinator of Peer Support for the NO/AIDS Taskforce. He works at the Crescent City Health Care Clinic on Tulane Avenue in New Orleans.

“I’ve been doing this for over 20 years, so I am quite knowledgeable about AIDS,” Smith said. “When I was 14 and had sex for the first time I got infected. Next month I will be 50.”

Along with Smith, Crescent City Health Care workers who spoke included Dareen Berniard, who contracted HIV from the father of her children in 1989, and Gabriel Gutierrez. He said he contracted HIV in 1995 and now has AIDS. He said he became HIV positive from multiple sex partners while living in Miami.

Rayburn Correctional Center Medical staff member Leslie Temples spoke about awareness of hepatitis C and what to look for. It is a disease of the liver. Host Cheryl Barber said the purpose of the forum was to educate.

Smith said living with the disease has its challenges.

“Living with this hasn’t been a walk in the park,” Smith said. “When I got the news, I was given six months to a year to live. I felt I was not responsible for any of my actions. A dear friend the other day told me, ‘You’ve been dying since I’ve known you, and you ain’t dead yet.’”

Smith said he made the conscious decision to try and better himself in spite of the disease. He went to college for the challenge and has two degrees.

“The reason I am here is because it’s important for everyone in this room to know that they are not immune to HIV,” Smith said. “A sexually transmitted disease goes home with you. It simply needs a host.”

Smith said it is essential for those with HIV to take their prescribed medications though they’re not experiencing illness.

“There are 36 pills on the market today for treatment,” Smith said. “Who wants to take medication if they’re not feeling sick? The virus has the ability to lie dormant in your vital organs. That is why it is so hard to cure.

“All my meds make me nauseous,” he added.

“When I was coming up, no one wanted to be involved with a person with HIV. Now it’s a felony,” Smith said. “This virus has changed me in a lot of ways. It made me face myself in the mirror. It was easier for me to run and hide. I get my blood work done every three months.”

Smith requested inmates get tested when they’re released from prison.

“If you haven’t been tested, get tested when you get out of here,” Smith said. “Anyone can tell you they’re negative. Be clear with your questions. Every 90 minutes a woman finds out they’re infected.”

Berniard said doctors told her in the early stages the disease was manageable.

“The doctor said it was like the flu and if I ate right, I would be OK,” Berniard said. “I didn’t think this was going to be so life-altering.”

Berniard said she and her former boyfriend are no longer together. She has been married for over 25 years. She said her husband and the child they had together are negative. She has two other children.

Gutierrez said he got down to 65 pounds during the lowest point.

“HIV can affect you mentally and socially. I kept to myself and didn’t want to deal with people,” Gutierrez said. “It hasn’t been an easy journey. The most damaging thing about HIV is its stigma. It’s worse than the disease itself. Support is most needed for people with HIV. Having a positive attitude is also important for someone with HIV.”

Gutierrez said his carefree lifestyle is a thing for the past.

“Before, I didn’t value life,” Gutierrez said. “Life is too precious to mess around with.”