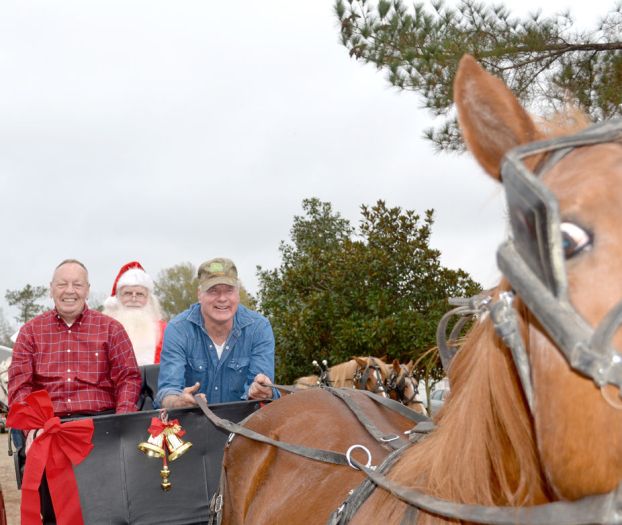 The parade also drew some heavy hitters as guests. Franklinton Mayor Wayne Fleming rode in the final wagon, but he was upstaged by the bearded man in the bright red suit beside him, also known as Santa Claus.

“We had some beautiful rigs that came out. We had some beautiful horses, wagons and buggies,” Mile Branch Settle Parade Chairman Judy Dale said. “One of the things I love about this time is that people in the community really come together. The Chamber of Commerce had the car show by the stage and a 5K Jingle Bell run/walk. The Varnado Store Museum sponsors crafts and food vendors in the Commercial Building. The Mile Branch Settlement is open with beautiful Christmas decorations and depicting the 1800s.”

“The parade was a huge success,” Dale said. “We encourage people to come out and enjoy it. Some people ride their wagons in from Mt. Hermon, camp and ride in the parade. It’s just a wonderful group of people who enjoy getting together, hooking their wagons up and riding in the parade.”

Santa Claus stayed over after Saturday’s parade and had his photo taken with children. Local school and church choirs performed.

A professionally decorated Christmas tree was raffled, and the cabins at Mile Branch Settlement were decorated in vintage style with fires in the fireplaces.

U.S. Department of Agriculture Secretary Tom Vilsack announced that the application deadline for the dairy Margin Protection Program will be... read more