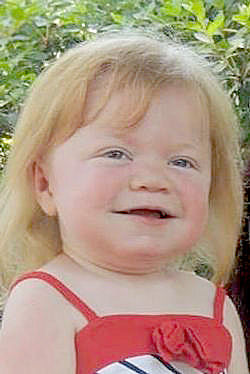 Cheyenne Gracie Holloman, age 3 and the daughter of Tasha and Richard Penton of Pine went to be with Jesus early Tuesday morning, Dec. 2, 2014, at Children’s Hospital in New Orleans. She was born Aug. 11, 2011. Gracie dealt with a rare genetic disorder her entire life, but she always wore a smile and had a unique personality that touched everyone she knew. She was always a fighter throughout her many treatments and was polite to the medical staff despite the pain she may have endured, as long as she could watch her favorite Sponge Bob Squarepants programs and videos. Gracie and her family received a lot of support from the community during her illness, and they wish to thank Trinity Baptist Church, as well as Bogue Chitto Baptist Church and the countless others who helped in any way during these difficult times. Though she only lived on earth a short time, Gracie gave memories to last a lifetime, and she will be sadly missed by all her family and friends.

She is also survived by her sister, Raylee Penton; two brothers, Trevor Penton and Aaron Holloman; grandparents, Dewanda and Terry Magee of Mt. Hermon and Virginia and Rickey Penton of Pine; great-grandparents, Carla and Robert Stewart of Bogalusa and Kenneth “Buck” Jones and Delores Jones of Angie; and four aunts and an uncle, Hannah Magee, Brandon Lapharaohs, Vickie Seal, Ginger Crawford and Chrissy Penton. She is also survived by numerous cousins, other family members and friends.

She was preceded in death by her grandfather, Kenneth Ray Stewart, and great-grandfather, Ina Pearl Jones.

Visitation was at Crain Funeral Home on Saturday, Dec. 6, 2014, from noon until the funeral service at 2 p.m. in the funeral home chapel, with the Rev. Walter Mixon officiating. Burial followed in the Pace Cemetery.