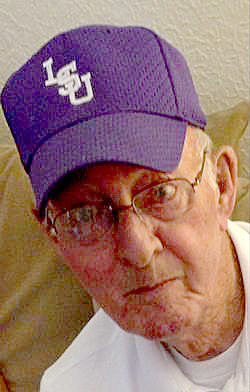 Being a husband to Helen meant that he was a constant in her life. He was there to be her best friend and to share a beautiful life together. So much of his life was centered on her. He loved her far more than any will know.

Being a father to Pam, Becky and Scott meant that he protected them, stood up for them when they needed him and worked to provide the best life he could for them.

Being a grandfather to Will, Erin, John Philip, Lily and Anna meant he was there to teach them, to swing outside with them, sing to them, cook for them, give them “Fair” money and love them unconditionally.

Being a great-grandfather to Liam and Sammy meant playing with them, giving them “Fair” money, too, holding them, lying on the floor with them to play cars and absolutely adoring their every move.

Mr. Silton was so many things to so many people. He wore many hats, most of which were LSU. He was devoted. He was loyal. He possessed a work ethic unlike what many have seen, and that is so hard to come by. He loved mowing his grass and feeding his birds. He loved riding his bike. He loved playing pool with his “Pool Pals” in the afternoons. He deeply loved his family. Most importantly he loved his God. He is remembered as a man with a quiet, steadfast faith, often found reading his Bible or playing old gospel music on the radio. He had said for years that when his time came, he was ready knowing he would enter into the gates of Heaven and embrace the Heavenly Father.

His earthly body was tired. It had traveled many miles during that life of his. In his new eternal body, Paw Paw is no doubt singing, clapping and tapping his foot to the beat of the Heavenly Choir and maybe a little Ronnie Milsap.

His family is eternally grateful for the last Sunday of his life, that they were able to spend it together as a family — a house full of loved ones, good food and countless memories being shared around the table — Paw Paw rocking Liam to sleep and softly singing “You are My Sunshine.” Those words ring so very true now. Paw Paw was the true patriarch of his family and the sunshine of their lives.

Visitation was held at Crain Funeral Home on Monday, Dec. 1, from 9 am until the funeral service at 11 am in the funeral home chapel, with the Rev. Paul Watts and the Rev. Pete Williams officiating. Burial was in the Springhill-Magee Cemetery.