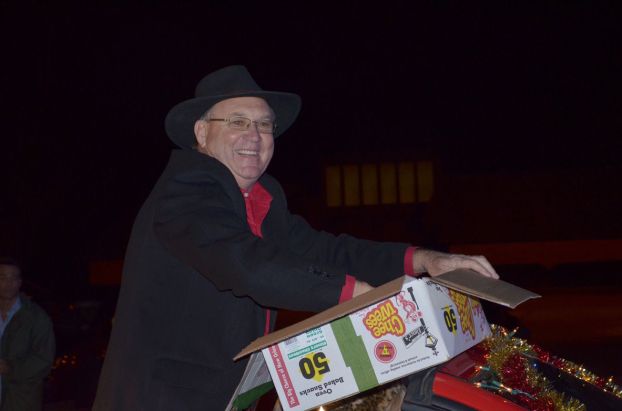 Just enough cold crept into the autumn air Thursday evening to get everyone in the mood to kick off the Christmas season in Bogalusa, and scores of families, bellies still full from the Thanksgiving feast, turned out to catch the annual Bogalusa Christmas Parade and the opening of Christmas in the Park.

Mayor Charles Mizell led the procession, tossing out bags of Chee-Wees to the crowd lining Willis Avenue in front of Cassidy Park, sparkling in its holiday finery.

Several other local officials, including Mayor-elect Wendy O’Quin Perrette, Councilman Teddy Drummond and Bogalusa City School Board Vice President Curtis Creel, also took part in the celebration, which featured families aboard decorated cars, four-wheelers, golf carts and just about anything else with wheels. And while Santa and Mrs. Claus brought smiles to the children’s faces, it was the candy tossed liberally from those in the procession that got their hearts racing and sent them scrambling.

Once at the park, the vehicles all turned onto Ben Miller Road and made the loop through the park, which is always beautiful but even more so when sparkling with thousands upon thousands of brightly-colored lights. The interplay of the lights hanging from the trees and lining the road with those of the makeshift floats made the scene even more magical.

Inside the park, with its expanded light display, children played among the lights while the adults congregated near the burning Yule log, sipping cups of hot chocolate from the newly reopened Deli in the Park.

Tina Ratliff Boley and six other defendants had their lawsuit dismissed last week for a lack of evidence. The suit... read more